Photos are stills from the film. 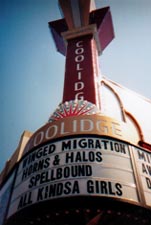 So it finally arrived: the premier of the All Kindsa Girls, the 'Real Kids movie' by Cheryl Eagan-Donovan. It ends up that all the talk is more about who got in or didn't get in than about the film itself.

The BGN was at The Coolidge Corner Theatre, second in line, at 2:15, fifteen minutes before the box office opened. The first guy in line asked for seats at 7:30 and they said : "SOLD OUT!" Yeah, that guy was pissed off! So weren't tons of other people. Especially those who were actually IN the film, and not able to get in to see it….at EITHER showing. (The 9:30 show sold out by 5:30)
Rick Coraccio, JJ Rassler…even John Felice himself couldn't get in to the second show!!! So he went to The Abbey to see Sylvain Sylvain instead!

Through the years we Boston rockers have seen so many movies about other scenes; URGH! A Music War, Decline & Fall of Western Civilization 1 & 2, Great Rock'n'Roll Swindle, The Blank Generation, The Filth & The Fury and many others, but it seems like we were always overlooked! Back in the early days Boston was one of the biggest, most active and productive rock/punk scenes around, second only to NYC but somehow Boston got ignored. Until Cheryl Eagan-D came along! Well it's about damned time! No wonder everyone turned out to see the film!! 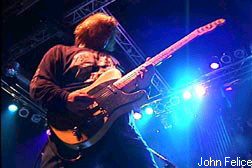 Now…about the film:
It starts with a full length version of the song All Kindsa Girls then it goes into the early teenage years of John Felice in Natick, MA. And here where it all begins…the problems with his father, the love of rock'n'roll, the musical influences, the friend and fellow musicians who all stuck by him through the years. The editing here is great, the film really flows, it tells a great story. It does just what a film of this sort should do!

The footage of The Real Kids in France is eye-opening! The extent of their popularity there was surprising, their reception was like that of Rock Gods and they talk of France as 'their home' but the availability of drugs increased their downward spiral. The Firestarter footage, from Japan, is stellar!! The Boston band, The Explosion, featured in one section look and sound really great! 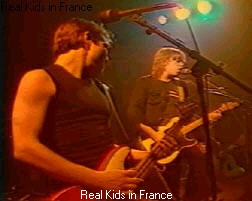 The musical numbers, maybe a half dozen full songs, are The Real Kids doing their best flat out rockin'. But this takes up a lot of the one hour film and leaves the numerous interviews short changed and unsubstantive. But we have spoken to Cheryl Eagan-D and John Felice and they have both said that the film is "still totally a work in progress"- it just isn't done yet! And this shows, in that the first third of the film is solid and well put together but the rest needs more editing and development.
Cheryl and John both say this is the first time that either of them has seen the film in its entirety! So they are getting an idea of what the film is and what it needs. Cheryl accepted the invitation to screen this film, at this time, from her sponsor, The BFVF. She says she thought this viewing would be attended by the film-making community rather than Boston rockers and she never even expected to sell the 100 tickets!
But a hardy congratulations to Cheryl Eagan-Donovan for making what she calls "a punk film". What she's been able to do is get a film of The Real Kids made in some form, and it will only get better! She has set the bar for all those who follow.

SO for all of you many, many folks who could not get in to see this film…don't despair All Kindsa Girls will be shown at The Allston Underground Cinema on Sunday July 20th at 7 and 9 PM. Cheryl's ultimate plan is to have a combo Real Kids performance and screening of the final version of the film sometime in the fall of 2003.