You Can Go Home Again

by Johnny Angel
From the LA Alternate Press

Some things never leave you. Your first slice of pizza, the first time you got behind the wheel, the first time you get laid--it's more or less the same for everyone (with the cuisine or transportation of choice varying, of course).They remain because you keep on doing them after the first time--and the great majority of homo sapiens loves food, movement and sex. You're also expected to keep pursuing them , even those that diet, take the bus and are monogamous, they still enjoy the basic acts described.

But if you're a rock and roll musician, there comes a point when you're expected to stop playing it, even if your first gigs were close to heaven. It isn't dignified for an over 45 to strap on a guitar (over the proverbial potbelly), crank the Marshall and kick it out--you look silly, why haven't you grown up yet, check out the grey-skulled buffoon, hell, he probably doesn't even know what Emo is!

The exception to this rule is the band reunion. We ancients are permitted to limp out onto the boards as long as it's in the context of our ever-diminishing youths. That's our pass, because we were once somewhere near the zeitgeist. Instead of railing against this ageist injustice, I have to agree, even though it severely limits my own rockin' options. As Cheetah Chrome pointed out, when relating the story of his unfinished solo disc, ''how can I write anything, when I ain't got a deadline and besides, my new shit sounds like the shit I influenced 25 years ago, so kids think I'm ripping them off, man!" 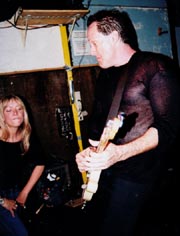 After seeing my former band-mate and good buddy Mike Martt with the reunited Tex and the Horseheads and listening to the glowing tales of "Kix Fix" from my pal Brian Forsythe (Kix was considered the "American AC/DC" back in the 80's and reunited last year with a variation on their name to prevent their former band leader from injuncting them), I too had to get aboard, it sounded like too much fun. Problem is, no Johnny Angel rock band in California could fill a taco stand with fans, and so, it was back to Boston I went.

Like Mike and Brian, my halycon days were the 80's and my band was the Blackjacks, a kind of Replacements/Gun Club/Heartbreakers thing. Like the Horseheads, we were on a small American indie label, like Kix, we had a substantial fan base of hard rock suburbanites. Unlike either, we weren't popular anywhere but one city, despite excellent international press-so, who would care?

Lots of people, as it turned out. Aided and abetted by our drummer's brief turn in the Dropkick Murphys and also by the pervasive nostalgia that has always hung like a curtain of smog over Boston. It wasn't the first major city in America for nothing, anything from the past is treated with a kind of reverence one never sees here, where Californians revel in the new religiously, Bostonians cling to the past with the same level of fervor--so, for once, I was on the right side. 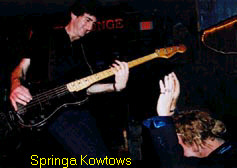 Booking the shows, as Brian predicted, was a breeze, rehearsing for them also a breeze, as predicted by another reunion guy, Steve Jones. I called Jonesy in a rage after the two former Blackjacks were complaining about the set-list and he laughed. "The second you guys get in the practice space, all of that will disappear, it happened to the Pistols-don't talk to them on the phone anymore, just do it". And he was right.

What a stroll it was-as it was for Mike and Brian, the great anxiety of wondering if anyone would show up (another reason we old folks don't gig, our peers don't come out anymore) was allayed by a pair of sold-out shows. Our old friends came out and bellowed out our mean-spirited hooks, hopped up and down as best they could and we were kids again. Best of all, from my point of view, was the good reception the one new song received (a sad song about our late manager about his suicide entitled "Last Ride"), which lifted my spirits some-I can still write 'em, I thought.

But one thing distance and age gives you (if you're lucky) is a little wisdom. This was a party for middle agers enjoying a rare night out for the most part with the Blackjacks and I as ringleaders. After our sizable payoff at the end of the second night, the lads and I took a vow that it ended there and then and not to get carried away. Because a second reunion might carry half of the magic, maybe.

So, now when I crack open a tome and see some teetering group of clods re-upping for one more joyride, I won't even let my brain indulge in even the slightest slide into contempt. I am them and they are me and the only way we can justify this idiocy is under our banners tattered from the past-and really, what the fuck is wrong with that anyway?