Punks Are Folk Too

Tonight the Punks Are Folk Too venue was Passim's, the well-known Cambridge folk institution, which also houses the vegetarian/vegan restaurant Veggie Planet.
A complete turn around from your usual night out at a club, listening to regular bands, that's for sure;

No alcohol
No smoking
Tables and chairs to lounge at
Food and hot drinks if you want it
And what a group of guys to have on stage at a place like this!
Surprisingly all the guest rockers of the evening were all on stage, all the time, lined up in chairs to take turns performing songs.

Chris and Wimpy, the potty mouths punks of Boston (and NH) rock, started out the night with We'd Have a Riot Doing Heroin/Fagtown later went in to stuff like Drink, Fight and Fuck as well as a great dead-pan version of The Ramones' I Don't Wanna Walk Around with You. Wimpy sat there with his usual fuck-you sneer, head cocked to the side for the whole evening, taking swigs of water mixed with Jack Daniels. Speaking of 'cock'ed, hearing Hard Candy Cock, which Wimpy lovingly dedicated to his girlfriend, done folk-style was pretty amazing experience, I must say. Chris was quiet, playing guitar most of the evening…throwing out some funny one-liners from time to time..

Pete Depressed was great! He had a little trouble getting started on a song and mused "Hey how come when folkies keep fucking up and have to start over it's called ART?" He did stuff like Cheers (Raise A Pint), What Have You Got Against Me? , 2 Much 2 Drink, I Don't Want To Go To The Beach and the really impressive Trouble With Women which even impressed Lenny Lashley, who described it as "DEEP"! By the way Pete is the guy who puts these shows together…Pete, brilliant idea!!

Jonee Earthquake…well was Jonee Earthquake…this guy, even in insane pirate gear, is a pretty damned good musician and had some really thought provoking songs. He had the forsight and the chops to do a nice fingerpicking instrumental. "Instumental?" Lashley yelled, "I'll be at Charlie's Tap, call me when it's over." The pirate geer might have been explained by the sea shanty he sang with lyrics detailing "recording piracy"...maybe. I don't understand his story about his song "The Ballad of GG". He says he wrote while on the road after hearing about GG's death. It's just "Don't Talk To Me" with different lyrics but …whatever. But my fave was the lament about being a working stiff peon (sorry don't know the title of the song) and the lyrics ( Chorus was:"This must be the worst fucking job I ever had.") were really universal and all encompassing in their scope.

I think we can all agree that Lenny Lashley is an awesome stage personality. He is so much fun to watch up there. He's rabble-rouser-punk tough but somehow cute to boot and so fabulously tatted up!! Um, anyway he did a bunch of Irish/punk tunes such as Lenny & The Piss Poor Boys' Leaving in The Morning and the Ramones tune We Want The Airwaves. These songs transferred well to the folk presentation for the evening.

Passim's has traditionally had a speaker just outside the set of double windows that look up onto the street so passers by can check out what's going on inside. This was a constant source of amusement for our friends on stage, reveling in every "fuck", "suck', "drugs", "I hate you" they could muster when some Cambridge type sauntered by! The speaker, it turns out, had been removed, but it didn't stop them from 'throwing the finger' at and generally taunting every viewers outside. 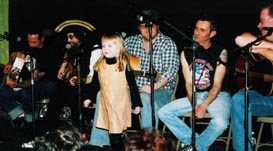 But the real shocker of the evening was the adorable little 6-year-old girl in the audience. I'll let you folks in on a secret, these guys were a somewhat spooked by the idea of this little sweetie with virginal ears being in the crowd. Then to our amusement she jumped up on stage and started dong an Irish jig!! What a bizarre juxtaposition!! Really funny! This girl was a consummate professional and at the end of the evening, in her pink fake fur coat and hat, went up to each and every fellow performer to shake their hand and thank them for letting her dance!!
The kicker was Pete Depressed advise to her "When the ice cream man's name is Wimpy, NO POPSICLES!!" 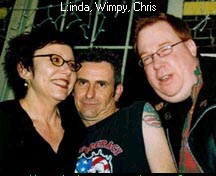 Another highlight was Chris and Wimpy's last song, the absolutely hilarious though incorrect and uniformed: Stupid Fucking Vegan… Guys, get your asses outta bum-fuck New Hampshire every once-in-awhile and you will realize being a vegan is actually very punk! It ain't about being a tree huggin' dork into the Dead no more! None the less…you are still my little darlings (as recently described on the Noise board!) and the song had most of us laughing uncontrollably!

So , kudos to Pete Depressed for coming up with such an awesome idea and remember to check the BGN news since we always list up coming Punks Are Folk Too and it is worth a trip to check it out, no matter where and with whomever may be on stage that night!!!