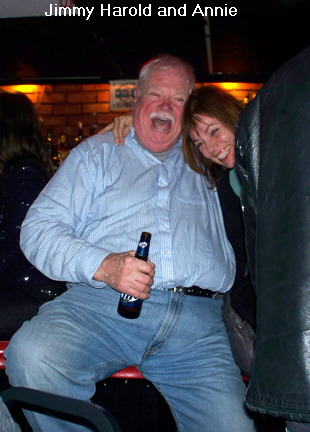 This was actually the third Rat Reunion show we've seen. The first Rat Reunion was at the Arlington Theatre and was run by Chuck White of the DirtyWater website. Chuck never actually contacted Jimmy Harold for this high profile show. Now, Chuck is in Florida (I think) and the web site is history.
The second Rat reunion show was run by Judy Wilburn, a beloved and devoted scenester from back in the day. Who keenly felt and saw the need for another night like this. That was at the Dilboy Hall in Somerville and was a popular success measured by people's response to the night. And for this second show Jimmy Harold was, as he should be, contacted, invited and there for the event.
This third Rat Reunion show was put together by Nancy Neon. The line up went through a few changes until quite close to the actual date. And it finalized with a representative and appropriate bill. As Frank Rowe said; "This bill looks like an ad in the Phoenix from 1978."
The groups or some of the personnel in these groups were playing the Rat in the late seventies. This was an early-phase Rat reunion. As the night passed you could hear some Boston rock history.
These groups were formed in that sweet spot when the musicians were driven by dissatisfaction with corporate rock schlock but before punk was codified. There's a whole essay I could write there but let's say this: this is where Jimmy Harold picked up the banner and gave these bands a stage. Not an obvious thing to do at the time but one that turned the tide for the burgeoning scene. That's why we were here this night; history lesson over.

Miss Lyn got there early so as to see Willie Loco Alexander's opening set at 8:30. "It was is just so good to see Willie up there and hear him do all his old songs. Tonight it was Willie with his keyboard and "Angel" looking very different, on drums. It was minimalist. At first I wasn't so sure about the minimalism…for maybe a half of the first song, but Willie plied his magic and I could hear the whole boom boom band behind him..or better yet the songs as they were on their orignal recordings!um, you know, ….in theory, let's say.

The songs; "Kerouac", "Hit Her with The Axe", "Mass Ave.", "At The Rat" are all so near and dear that they come alive and sounds fantastic no matter what! And of course Willie is a great performer and as cute and lovable as ever. At the end I realized it was a wonderful intimate kind of feeling having WA up there doing a simplified set. It worked wonderfully!!"

Next up was the Varmints. They sounded pretty damn good tonight and Billie Borgioli seemed to be in command and on top of it for the set. I think there was an energy in the room that fired everyone up!

Jimmy Harold arrived sometime during the Varmints set and seemed very happy with the night. It must be great to have this legend live on so strongly as such an important part of Boston music history! And it's Jimmy we can thank for that! Yes, as a matter of fact: THANKS JIM HAROLD!!!

I walked in on The Boize who sounded more pumped up than ever. How does that happen? I could see Billy Connors had a new Rich model guitar that was thickening up the sound but it wasn't just that. The drumming was very strong and the group was ON. John Kelly was singing with energy and emotion.
I didn't recognize many of the songs, were they new? Maybe they are. The band is currently recording at RayBoy's studio.
One song was called (I think) "I'm Sick of My Generation". A Who chord progression underscored the allusion and the words were a scolding for a generation that came up short. 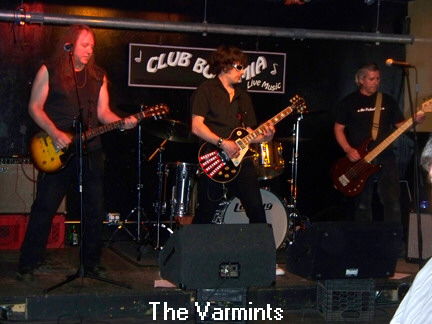 Fox Pass played the Rat many times and for this occasion they played a set of songs that they did in fact play at The Rat in 1977. Fox Pass are never unruly but they were rockin'. Their current drummer was perfect for a full tilt foray into older faves like: "It's Rock", "Sex" and "Amtrak". I was bowled over with "I Believed" from their first single (1976). How long is it since I've heard them play that? I can't remember. It was gift for these ears.
As an aside: Amtrak and It's Rock are on the current Fox Pass release which has a cross section of songs from their whole career.

Next up was another standby from back in the day - Third Rail. Richard Nolan's band has gone through so many personal changes through the years but the groups always had the Nolan imprint on it. This night his guitarist was missing and Billy Connors filled in. With only one or two rehearsals he did a very good job. The guitar lines were minimal but assured and brought the songs through with the help of the rhythm section (the drummer deserves big kudos). With all the groups I saw the songs that are stuck in my head later are Third Rail songs, not one but three: "It's Over Now", "Take That" and "Rolling in Clover". Richards's material just has that quality.
(Note from Miss Lyn …agreed! I woke up with "It's Over Now" going through my head all day the next day!)

Jon Macy of Fox Pass said this night that one of the keys of playing the old songs is to never have a hiatus. That makes your material of one piece, you just pick and choose. That works for Fox Pass and also, we would say, Classic Ruins. Like every band this night the Ruins are up for the gig. They sounded extra full. Miss Lyn noted Frank was sounding extra powerful this night. Is it the guitar? She was asking about Frank's new Mosrite style guitar. He's been talking about it and sure enough it's a beauty (see the pics) and has a big full sound that beefs up the set. It makes it an extra good Ruins gig.

To me this was a night of great drumming and the drummer for the Ruins (ex of the Crybabies) continued the trend as did Richee Johnson of the final band The Last Ones. All night there was respectable attendance (after a slow start) and the pleasant surprise was that a good percentage of the audience stayed right though The Last One's set to the end of the night (and it was a long night, starting at 8:30pm). This top shelf performance by The Last Ones featured sharp guitar work, as one would expect from Danny McCormack and some heartfelt singing by Rick Coraccio. Many of Rick's songs have a moody and emotional core. That came out in spades and made for a very captivating set that held you even after hearing so many other bands. Just when you though there could be nothing else left in the well out comes "Number One Again" and they nail it. It's symbolic of everything that was important on this night.
A song from the heart, a local hit from a local band, both meaningful and emotional, a record you are proud to own, and a performance that was everything the band could give.

Miss Lyn says though, "The only problem I had with the night is that it wasn't made to feel like a special occasion. There should have been some visuals and/or some on stage banter about the old days, about Jimmy Harold, things like that. This was a celebration of the early period of the Rat, and it should have been particularly noted by each of the bands. No one said anything about that while on stage, except Willie maybe."

So, congrats to those who were smart enough to show up. You got a lot for your money on this night. Nancy did the scene a nice turn and another good thank you to Jimmy Harold .