Local Lyres
Photos by Susan Aprill except where noted. 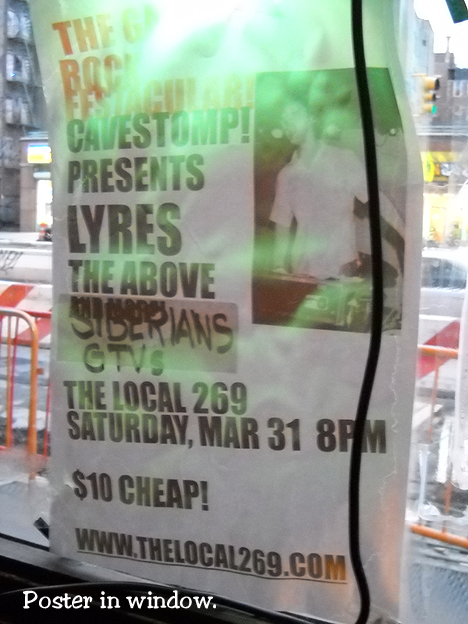 The sky is as gray and featureless as a slab of sheet metal. It's spitting cold droplets of rain at the precise rate needed to produce an annoying scraping noise from my windshield wipers even at the lowest intermittent setting. The outside temperature gauge on my old Chrysler reads 47 degrees. I am skeptical. "Jeez! It feels like thirty." I complain to my wife Susan as I boost the car heater another notch. "Be thankful it's not snowing," she says sweetly. The forecast did say snow. Maybe I should count my blessings.
Let's see: traffic is light enough to set the cruise control to 65; we have enough gas to make it to New York City without stopping, and Ricky Nelson is rocking "I Believe" on the satellite radio.
Susan cranks the volume for James Burton's guitar solo and settles back in the passenger seat, her stocking feet tapping time on the dash.

I love this hotel! The place is immaculate, the staff is awesome, parking is free, breakfast is free, the freshly baked cookies in the lobby are free, all for under 150 bucks. It's gotta be the best deal going in New York. The only bad thing I can say about the place is that the elevator is slower than cold molasses. Above the door, the floor indicator points to "lobby" yet nothing is happening. As an ex-forklift mechanic I recognize the sound and smell of a DC electric motor badly in need of service. We consider the stairs. Finally "BING!" the doors slide apart and we enter with all our stuff, cross our fingers and push the button for the fourth floor. Thankfully, the machine delivers us safely, if slowly, to our destination.
Our room is very nice, recently renovated, with an amazing panoramic view of the Manhattan skyline. Ex-New Yorker Susan starts naming all the buildings and bridges and telling stories about each one. I didn't realize that the Empire State building is now the tallest structure here. We consider the empty airspace that once was the World Trade Center, formerly the two tallest. I remember the awful feeling in the pit of my stomach that day back in 2001 all the way in Natick, Massachusetts, but I can't imagine how painful and scary it must have been to be a resident of the very city under attack. We reflect respectfully and silently in front of the large window.
"How 'bout a drink?" I ask and pull a bottle of Absolut out of my bag. "I'll get ice," Susan offers and heads out the door, bucket in hand. I flip on the TV and find Wesley Snipes battling waxy skinned vampires in Blade II. Excellent! 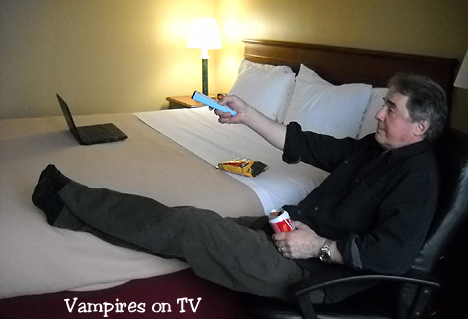 It's time to go to the Local 269 night club in Manhattan. It should be about a ten minute drive to the Lower East Side. We jump on the BQE and turn onto the Williamsburg Bridge. "OY VEY!" and "FUHGEDDABOUDIT!" reads the large green signs halfway across. A bit of New York humor compliments of Brooklyn Borough President Marty Markowitz.
Susan hangs a quick right onto Norfolk Street, and with Houston Street in sight less than a block away, we find a parking space big enough for a 1970 Cadillac Sedan Deville. Yes! The parking fairy is indeed smiling down upon us.

With the exception of The Plough and Stars in Cambridge, this must be the smallest night club in the world. The placard on the wall next to the bar gives the legal capacity as 74 persons. I don't know, I think that maybe my kitchen is bigger. Even though the poster in the front window says "Ten Dollars Cheap," they're charging twelve. Oddly, nobody is complaining.
Earlier in the week, band leader Jeff had emailed me to apologize for dominating the last three Lyres rehearsal, focusing on one song (which we would not even play tonight), so would I be so kind as to show up at 7:30 for a half-hour mini-practice at the club? He'd pre-arranged this with the promoter John Weiss so I assumed everything was all set.
Well... here I am at the night club, it's 7:30, none of my bandmates are around, and there's a loud blues band on stage. They have been playing the same 12 bar progression for the last 15 minutes and it doesn't seem like they'll be stopping any time soon. It's an ongoing jam with different musicians and singers hopping on and off the stage. 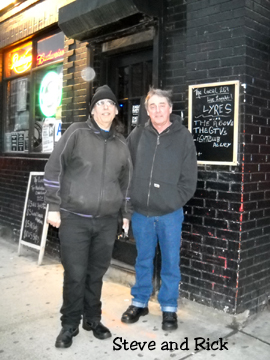 The loud blues band finally finishes their 45 minute number and I'm looking forward to doing something besides leaning against the wall. The club is supposed to provide the Lyres with a complete backline including drums. Imagine my surprise to see all the equipment carried off to the basement, leaving the stage completely bare! Oh well, I guess it's time for a drink!
Not seeing any Kahlua or decent vodka at this "shot and a beer" bar, I buy myself a Bud and return to my leaning spot at the back of the room. "Someone else will surely handle the equipment," I say to myself. And sure enough, ten minutes later, a couple of guys start hefting the stuff back up out of the cellar. This little club is almost half full when we Lyres begin assembling on stage for the sound check/mini rehearsal. I have absolutely no idea what brand of equipment I'm plugging my old Epiphone Rivoli into. It's a thin wafer of an amplifier head sitting atop a grey felt speaker cabinet. It has no knobs that I can see without my glasses. It's obviously digital. Being an old school kind of guy, I am wary of any amp that doesn't say Fender or Ampeg. I stick my cord into the thing and fumble with a tiny switch. The name "Nemesis" glows ominously in blue LED. "Uh oh" I mutter and tentatively pluck low F. Bottles rattle behind the bar. I'll be damned! Smooth as single malt Irish whiskey and just as strong!

Because there are so many people here, Jeff announces over the PA that we're doing a sound check and rehearsing a couple of newer songs, so please bear with us. However, there's a tipsy woman in the club who apparently didn't get the memo. Every time we stop to get a part right -- and we do several times -- she catcalls. When we start up again, she pumps her fists in the air, shrieks "YA ALRIGHT!" and dances up a storm. Then we stop after a measure or two. "HUH! WHAT NOWWWW!" she loudly whines. We start up again. "WOOOOO! YEAH!" more dancing and fist pumping. Then another stop. "WHAAAT! WHAT NOW!?" she screeches. This goes on for about fifteen minutes until the sound man gives us a wave indicating that the sound check is over and it's time to get the first band set up. We unplug our instruments and vacate the stage. The woman goes ballistic. "WHAAT!? WHERE YA GOIN'? THAT'S IT!? YOU GUYS SUCK! I WAN'T MY MONEY BACK!" 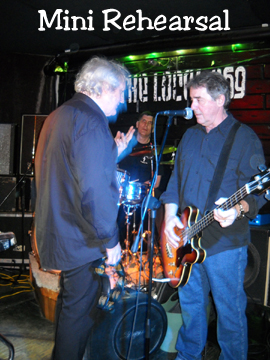 Local 269 is so packed it's tough to move about. It's one of those times when a guy can really appreciate the no smoking law. Remember the days when after a night of clubbing your clothes would reek of cigarette smoke? It would even bother me and I was a dedicated smoker!
Thankfully, the large basement is open to band members and their guests so I am hanging out there. John Weiss has provided a cooler full of Buds. As a working musician, I have known this dude for decades, but this is the first time I've spoken with him at length. I've always seen the no-nonsense, business side of him, a role he plays very well. After all, there's work to done and schedules to keep, the important but thankless side of the music business and thinking back, his shows have always gone well. But right now he's hanging out, smiling and chatting and making sure we have enough beer, tossing another 12 pack into the large white cooler on the floor. Yay John Weiss! Nobody does that anymore. Not in America. There is no more free beer for bands, not like in the old days. If you're lucky, you may get a couple of tickets redeemable for a cheap draft. 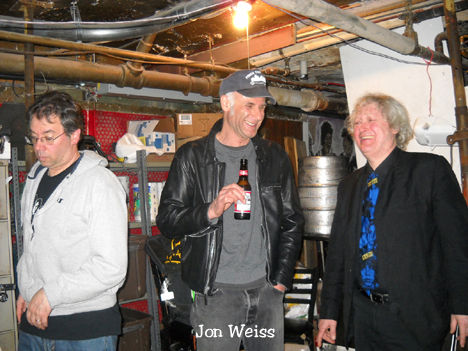 Susan and I duck out to get a quick bite to eat at the diner on the next corner. Cheesecake and coffee for her, a Rueben and a Coors draft for me. At first I'm taken aback with the open-faced eat-with-a-knife-and-fork Rueben, but it tasted damn good and it was a hell of a lot neater that way. I have to report this to my friend Mike Quirk as we have an ongoing mutual search for the perfect Rueben. Not that this was a contender, but still notable because you couldn't pick it up and eat it with your hands. I'm not even sure if it qualifies as a sandwich!

We were back at the club in time for the GTV's, featuring ex-Mondo Topless frontman Sam Steinig who expertly carried on the tradition of cool organ driven garage rock. It was very enjoyable to say the least. 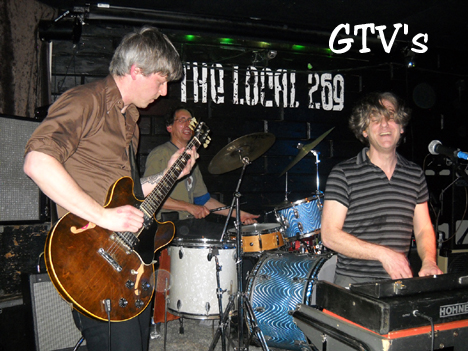 I gotta say, the excitement of gigging in New York City still gets to me. I feel like I need to bring my "A" game. Why is that? I've given this a fair amount of thought over the years and I've come to the conclusion that it must be the people. What else could it be? The seven dollar toll on every bridge? The ever present possibility of being crushed by a speeding taxi? The four hour drive to get here? No siree. It is the people. 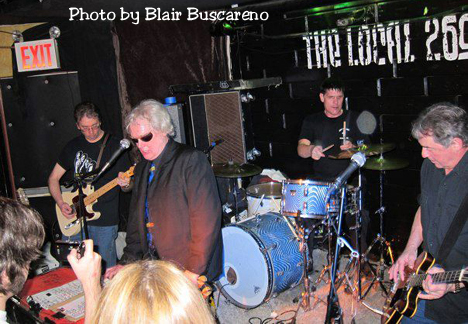 I've said it before and I'll say it again, I have met some of the nicest people here in New York. And not just in the music biz. I lived and worked here for one whole year, from the summer of 2006 to the summer of 2007, and I was amazed at how friendly and accepting my neighbors and co-workers were. If New Yorkers have a reputation of being anything otherwise, I know for certain that it is not deserved.

As we run down our set list, play the songs that we play, in the way that we play them, the response and the reception we get in this tiny venue is no less than wonderful, validating what I have spent most of my life doing. I'm certainly not playing a perfect set, making minor mistakes and missing a cue or two ( OK, maybe three) yet it doesn't seem to affect the music. My bandmates and I are in that zone where the excitement and the feeling become more important than the technical correctness of the performance. I see it in the faces in front of me and I feel it in our playing. It's quite unlike anything else in the world. And let's face it, it's all about that feeling. Nobody would be playing it, nobody would be listening to it, nobody would be buying it, if it didn't generate that certain feeling. If you are reading this, you know what I mean, you've felt it too. Pleasing...yes. Indescribable...no. There are, in fact, many words to describe it. This music we love is no great mystery. It is simply Rock and Roll, doing exactly what it is supposed to do.