All photos by John Nikolai 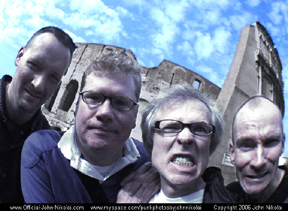 WHAT THE HELL AM I DOING? I'm 48 years old and I'm on top of Richie Parsons' shoulders playing the guitar before a small but enthusiastic crowd in Somerville Massachusetts.
Moments before he threw his Gibson on the floor, smashing it into pieces. We continue the set and during the Stooges "Now I Want To Be Your Dog" I feel a head come up under my legs. Now I'm an unbalanced load, steadied by an audience member. I shut my eyes and keep playing, hoping and praying to get back to steady ground without getting trashed like the aforementioned guitar.
Are we just thrillseekers or is there something else at work here?
Eight weeks later I put my existential theories to the test in Rome, Italy, where the Axe are booked to play The "Road To Ruins" Punk Festival. Promoter Pier Paulo has been trying to get us to play this for years and now finally its going to happen. Can't Wait, Can't Wait!
We meet at Logan airport, drummer - Jack Clark, bassist - Frank Dehler, singer- Richie Parsons accompanied by photographer - John Nikolai. We pass around John Nikolai's prototype book of his punk rock photos on the plane. 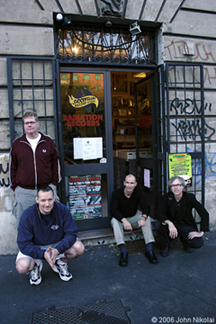 When we arrive, there's a holdup in Rome because Frank's luggage and electric bass are lost in transit. We finally give up waiting and hit the road to the Hotel Amico which gets two stars in the guide books but for us this is the Ritz Carlton for a week.
We go sightseeing at the Coliseum, have dinner and go to the club for the first night of the festival. Our Italian hosts know everything about the Boston scene that we came from. We discuss all the bands - Pastiche, The Neighborhoods, the Stains, GG Allin, The Real Kids.
In a comparison of our different styles, Enrico sums it up for us - "La Peste were serious intellectuals…but you are nerds - Nerdos!"

CLICK HERE for an Italian site with many more great shots of the Axe
and others in this festival. Scroll down the page 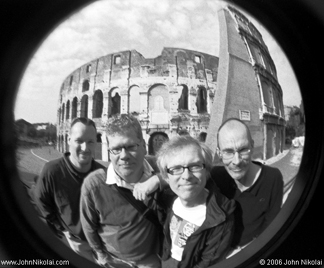