The Dents - The Marvels - The Kowalskis - The Spitzz

Whoever lined up this gig knew what they were doing..lots o'horny guys were out in droves to see this gig! It was gurls-galore night with cuties such as Jenn and Michelle in The Dents, Kitty and Mitzi in The Kowalski's and the tall and willowy Victoria in The Spitzz. 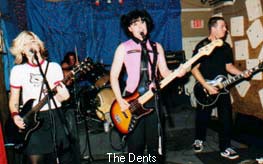 The Dents were on first and the guys lined up at the front of the stage to salivate. We think this was the first time we ever saw a drooling ovation! The Dents had it all together: good sound, good songs. Michelle was cute and cuddly retro punk in pink and ponytails with a melodic kinda voice. This was played against Jenn's raspy growl and no-frills punkette style. The girls were funny with their stage repartee and the band delivers really good pop-punk. Looks to us like they are in the position to make it biggerģhow far will they go??? 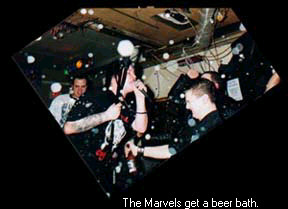 The Marvels were up nextģthe only all male band- the guys in the audience must've been bummed out, They went out for a smoke or to the other side for a drinkģ.unless they loved the straight ahead old school punk! These guys are now Miss Lyn's favorite band!! But in a night in which beauty did aboundģthese guys uglied up the stage just right!! BUTģwho did we see right upfront for them but a bevy of pierced & tattooed girl-fans!! We don't know what they were singing about but they sounded most awesome and did a stripped down version of "Are You a Boy or Are You a Girl" which was great! We loved 'em and will see 'em again!!

The Kowalskis came in from New Jersey and the guys flooded back to the front of the stageģKitty and Mitzi did not disappoint, they looked great! They did 8 new songs and left out some of their more well known tunes, which sort of diluted the Kowalski experience for some of us. They were Blondie-esque pop and pleasant but paled, by comparison, to The Dents. 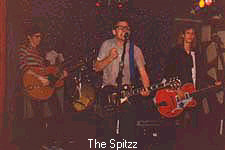 The closing band was The Spitzz.A band'o'beanpolesģ.height & weight and must've been strict requirements to get into this band! The lead singer twitched and jerked like there was an alien inside trying to get out to find a more suitable host. But his fashion sense was impeccable! The short sleeve shirt over the slightly longer sleeved t-shirt was perfect 50's nerd!! Victoria played a semi-hollow body orange Gretch - unusual! Their angular art rock sat just fine on the palette.

A fine evening all together! But at the next gig like this they better remember to station a trough at the foot of the stage for the drooling man-fans!