Ever since I moved to New York, this has been my once a month routine: Drive to Boston! I always leave about 10:00 Saturday morning and drive to my friend Richie Johnson’s house in Burlington for a Boize rehearsal at 2:00 p.m. After that, Susan and I check into the motel and find some place to eat (this month it was Friendly’s). Then we drive into town for the fabulous Nancy Neon Night Rock and Roll series! So far it has worked out pretty good and the weather has been very cooperative.

7:45 p.m. The Kirkland Lounge, Sommerville, Ma.
I can’t believe my eyes! A parking space right in front! Aw man! Sweet! This has never ever happened, but then again, it is 45 minutes before the club officially opens. Susan grabbed both my basses (a solid body Gretch for the Boize and my trusty Epiphone for the Lyres) and I hauled her 100 watt Ampeg bass amp out of the back seat and took two (count ’em, one, two) steps to the front stoop and pushed the heavy wooden door open. Omigod! The place is packed! At 8:00 there are more people in the Kirkland Lounge than I have seen in a very long time. It’s too bad the door man won’t be here for another half hour. All these people got in for free. In fact, the club is still in its sports bar disguise. Yes! The Kirkland is not just a rock club. It has a sports/ yuppie-ish pub thing going on every day with waitresses, hot food and everything.

8:30 p.m.
It is time for the first band to start seriously thinking about making a move toward the stage. That first band would be The Boize. One of my bands, but I am having so much fun hanging out, drinking and people watching that the impending set seems like an afterthought. With a wave of my arms I get Ms. Neon’s attention from across the room, and touching my watch and shrugging my shoulders, I give her the universal “how much time before we gotta play” signal . She shrugs “I dunno” and flashes all her fingers twice “twenty minutes maybe?” Just about enough time to take a leak, hit the bar (I’m drinking Budweiser tonight) and give my honey Susan a kiss for luck.

8:45 p.m. Dancing is back!
Me and my Boize are arranging ourselves onstage. I just can’t get used to playing stage right after spending some 35 years on the opposite side. The original Boize featured only me and Billy Connors on bass and guitar respectively. It was so much more symmetrical. These days I share stage right with lead guitarist John Leblanc. In the 70’s John came in after I left the band to join those brash young whippersnappers DMZ, making him an original member. I really like how Mr. Leblanc fills out the sound; it is reminiscent of when we used to employ Reddy Teddy’s guitarist Matt Makenzie (R.I.P.) for pretty much the same reason.
As soon as we started playing, there was a lot of hoofin’ going on. It was just one of those feel good sets. I felt great! The room responded, and everybody danced! I was way loving it. We ended with “Slow Down” and the dance floor was full. Even the Constable sent to serve me a frivolous summons was grooving!

10:00 ish
The Classic Ruins scrambled up on stage. They sounded pretty good but after a few songs the crowd was noticeably thinner. There is a perfectly reasonable explanation for this. The Boize were always a Somerville band (three of the Boize were born and raised here in Somerville.) The place was loaded with Somervillians and ex-Somervillians who had come to see their native sons. Hey, I like the Ruins as much as the next guy, but the hard driving, two guitar attack of Rowe and Crane are not really congruent with the three part harmonies and the jangly sappy love songs of Coraccio and Connors. Besides, it was way past bedtime! Be that as it may, there were still a lot of rockers lurking about the Kirkland and the night was still young. 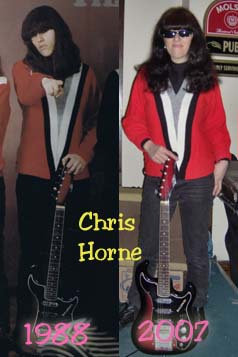 Lady Kensington and the Beat Lords are from Portland, Maine, not Portland, Oregon as reported on the Boston Groupie News web page. They feature the amazing Chis Horne. I have had a wicked crush on her since the early punk rock days when her band The Brood played with my band The Lyres at CBGB’s in New York City. They all played in bare feet! She still looks very much the same and in fact is dressed in the very same outfit that she wore on the cover of their 1988 LP “In Spite Of It All.” Her trademark Baldwin six string is still with her and she knows her way around that thing. Easily, effortlessly, effectively plying her trade, rock and roll, like not many can. Her stage presence is wonderful. She’s like Patty Smith meets John Felice meets Joey Ramone meets Question Mark. Every time I see her perform I wonder “Why is she not a huge megastar?” Her set is filled with wonderful, danceable, mostly original, undiluted rock tunes that are impossible to ignore. Obviously I like this woman! (Ya think! You’re absolutely gushing, Rick.) I may have clumsily and pathetically attempted to “pick her up” on more than one occasion but that was many years ago.
People were still dancing! For every song! Jeff Conolly danced! It was so wicked cool! He’s not a bad dancer.

12:00 roughly. Lyres’ set time.
Surprisingly there was no “MAKE EM SQUEAL LIKE A PIG” request to turn up the monitors. Instead Jeff looked at me and said “I don’t have a set list. What do ya wanna play?” “I don’t know” I said. “Let’s ask Paul.” Basically, we just played whatever song popped into our heads, not in any particular order, just call it out and count it off. It was one big party. I wish all gigs were like this. We finished our set and apparently had enough time for one more song. I got back on stage, flicked on my amp and started up our usual encore tune “No Reason to Complain.” Jeffy stopped it with a wave of his hand and loudly called out “100 cc’s,” one of my all time favorite Lyres songs. Really! This song is like number one on my top two list. I was shocked: we never play this awesome modified progression. It was a wonderful end to a most excellent night.
It was one of those special nights that somehow stays in your memory. I sincerely hope that you, dear Reader, feel this way as well. I sense that many of you do. It is, in fact, the reason I do this. It’s definitely not for the money (I made forty bucks). It’s not for the women (I already got a really good one). It is, however, for the extreme pleasure of performing at gigs like this. About a year ago, I was seriously considering quitting. I mentioned it to my mom. She looked me in the eye and said “You are not going to quit. You’ve been doing this since you were 13 years old. You love it and it keeps you young.” All right Mom, right as usual. I am not going to quit. I am going to play this rock music for as long as I can, and hopefully, if God is willing, that will be for a very, very long time. RC