March 27 2004 Hyannis Massachusetts, 12:30 pm
I am standing on my deck enjoying an early spring concert in the sun, provided proudly (and loudly) by a large ruby red cardinal and his muted brown (but just as large) mate. My cell phone comes to life, vibrating, lighting up and vocalizing a tune called Rise'N'Shine. It drives me absolutely nuts but I can't figure out how to change it. The caller ID says ˜Dan M˜.
˜ 'Sup Danny?" I spoke. "They closed Route 95 in Bridgeport." he spit out. "Your shittin' me!" I exclaimed incredulously. "I shit you not! A fuel truck crashed and MELTED the road! It's closed in both directions and it's gonna take two weeks to fix it. What time are you leaving for the gig?" he said in one breath. "Well, I was gonna leave about six-ish, but jeez, everybody's going to be dumping off 95 and jumping onto the Merit Parkway. It could be traffic nightmare." I reasoned. "Oh yeah. It's gonna suck but whattaya gonna do? See ya at the club." he said. "Save a parking space for me. Right in front." I joked.

5:45 pm
As I hastily loaded my stuff into my truck I thought about how much abuse this old amp has taken over the years since I bought it. Man! I threw this thing in and out of my 1974 AMC Hornet station wagon (with three on the tree) in the late seventies. I blew four speakers in it before producer Rick Harte bought me a really cool Gauss speaker that was rated at so many watts that it would be impossible to blow.
I have even taken it to Europe. Twice. Years ago The Lyres would actually travel in Europe with our own equipment. I remember my amp tumbling end over end down the luggage ramp at Heathrow Airport in England. Jeff and I used all of our strength to stop the rolling behemoth and pull it off the conveyer. One of the transformers had broken loose from the chassis and wiped out six power tubes. I somehow managed to get it running for our first show with R.E.M. at the Lyceum (and the rest of the tour.) Ya gotta love Fender amps. Can't kill 'em.

"I gotta go pretty soon Mary Jo." I lamented to big brown eyes. "Have you got enough money? Do you have everything? Are you gonna be warm enough? Did you get enough to eat?" she said and hugged my neck, "I got forty bucks, everything's in the truck, it's not that cold out, I'm stuffed." I said and kissed her warm forehead. Soft, fragrant blonde hair all over my face. "Drive carefully and try not to drink too much. Here, take this for the ride." she said as she handed me a blue canvas bag out the door. "Mary Jo! You packed me a lunch?" I said turning back and smiling, (The woman does spoil me) "Just a meatloaf sandwich and some fruit, and two bottles of water. Do you have the camera?" "Yup, I have it right here." I said and pulled it out of my breast pocket. "Smile!"

7:20 pm
I love driving over Narragansett Bay. It is wicked scenic and you don't have to make that northerly 60 mile loop up through Providence. Once you do connect onto Route 95, you're almost into New London. From there it's just cruise control all the way to New York City. Tonight however, because of the problem in Bridgeport I will be making some kind of detour. Traffic was light so I decided to simply stay on 95 to just a few miles before the trouble spot, just past Milford, and take the marked connector to the Merit Parkway (Rt. 15) right into NYC via the Henry Hudson Parkway. It all worked out pretty good. I hung a left at 96th St., all the way to Central Park where I took another left. My cell phone started dancing. It was Danny McCormack. "Hey Rick, where are you? We have to play in about 5 minutes." "I'm on Central Park West, I'll be there in thirty seconds." I said as I took a left onto 106th . "Excellent, see ya in a few."

11:30 The Ding Dong Lounge, Columbus St. NYC.
I took a left onto Columbus and I swear, as God is my witness, there was a parking space directly in front of the club. This is MAJOR! It never happens in New York City. As I backed into the space, our drummer Paul Murphy was just emerging out of the basement/dressing room that has a bulkhead spilling out into the sidewalk. "Nice space. We're going on as soon as you get your stuff in." he said with a happy smile. I shouldered my bass and pushed the battle scarred amp through the front door. The place is crowded and hot. I may have to break a sweat! I barely made it to the stage and immediately regretted wearing this turtleneck. Jeff saw me approach and with a wave of his hand he dismissed the multi-talented New York guitar guy, John Chalmers, who apparently was on 'stand-by' in case I didn't make it.

I quickly tuned up and flipped the toggle switch to ON. Old faithful sprang to life on all eight cylinders.
Jeff had a big red plastic cup in each hand and held them high over his head. "The drinks are really, really good here." he said loudly over the microphone. "I suggest the side bar. They are really GENEROUS with the pour." he continued. Everyone was just smiling away. They must have all experienced the side bar two or three times. Happy drunks; the best audience for a rock band.
This is the smallest stage in existence. The amps are stacked on top of each other and I am forced to stand sideways with my back against the wall (barely out of range of Jeff's wildly swinging tambourine). I put my bass out of tune a couple of times by hitting the tuning pegs against the wall. The set seems to be going well and I didn't get the customary 'turn it up' mime from Jeff. We're all having fun here. Everyone is just whooping it up, wicked.

I was thinking that it was just about time for a little drama. What's a Lyres show without a little drama? Right? My little Peruvian friend, Edgar, who was hanging out in front of me getting drunk (but basically behaving himself), decided he would slobber over Jeff's organ for awhile. He put his drink down on the red Continental. "This ain't a coffee table." was the immediate response. (How many times have I heard that before?) Fair warning. The drink didn't move and so Jeff backhanded the large red plastic cup directly into the face and shirt of poor Edgar who immediately retaliated by knocking over one of Jeff'sdrinks. The red sticky fluid splattered over my Epiphone and the brick wall next to me forcing me to seriously consider cleaning this old guitar. (I have been procrastinating for years) Not to be outdone, Jeff dumped all 16 ounces of his remaining drink directly on top of Edgar's head.
Old buddy Bill Pietch quickly sized up the situation and grabbed Edgar from behind immobilizing his arms. Someone else grabbed his legs and he was literally carried out the door kicking and screaming never to return the rest of the night. Two large replacement drinks were quickly offered up to appease The Conolly . Napkins were brought over and a tall attractive dark haired woman fussed over Jeff's organ (The Vox) sopping up every drop.

Judging by the audience response, the set went alright but MAN, we do have to practice sometime. It's been one year since we've last rehearsed. I'm feeling really rusty and lost. (Hello, Earth to Rick!! You feel like that for every single gig you've ever played in your whole wide world life!!) Thank God Conolly knows what he's doin'. We finally ran out of songs to play. 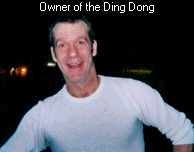 I packed up my stuff and pushed it through the front door and out to my truck. It was a cool scene out in front. Lots of people hanging out in the warm spring air. The club owner helped me heft the heavy Fender into the bed. "That was great Rick!! We're gonna do it again, right?" he gushed. "Yeah! I love this place. " I said and lit up a nice fat, Excaliber cigar. The one I've been saving for the ride home. "Your not driving home tonight are ya? You can crash at my place." he said. "I appreciate the offer but I gotta go and I'm really not all that tired. I didn't even have one drink. I didn't have time. See ya next time!" I said as I maneuvered the shifter into first and released the clutch.
I'm always in a rush to leave this city and I don't exactly know why. The clubs are great. The people are absolutely wonderful. Perhaps it's because I'm not from around here. I can recall many years ago seriously wanting to live here among it's tall spires and cavernous avenues. The appeal is clearly self-explanatory but I know that I would be as displaced as an Eskimo in Florida.

Please little pick up truck, take me to a place where the Red Sox won't win the World Series and the finest Rock and Roll bands in the World will go unnoticed by major labels. It truly defies explanation but screw it. I love coming home. I love the Red Sox and I love Boston Rock and Roll.- RC