Two things: 1.)The Chesterfield Kings, 2.) The House of Guitars.
This is what Rochester,NY means to me. In the late seventies, former Lyres guitarist Rick "Little Man" Carmel and myself, played matching Danelectro longhorn guitars. (Actually they were Italian copies called Dynelectron). Both these instruments were purchased in Rochester, NY at The House of Guitars one winter weekday when Ricky and his father decided to make the 16 hour round trip.
On another day (maybe 15 or so years ago) I was here in Rochester with the Lyres, and of course we visited The House of Guitars. We were just killin' time after the gig the night before when suddenly, between the rows of Gibson Flying Vee's and the Gretch Country Gentlemans, I spotted a beautiful Dynelectron FRETLESS bass guitar in a mellow tobacco sunburst finish. "I must have this guitar." I said aloud to no one in the aisle. 125 dollars later it was mine.

Let's fast forward for a moment to the late eighties, shall we? I quit the Lyres to procreate children and sold both instruments to my replacement Matt Mekios and never saw them again. Fast forward again to the late nineties: while chatting with Lyres producer, Rick Harte, I mentioned the tobacco sunburst fretless bass and how much I loved it. "I know, It's a great bass.", he said in that unmistakable voice of his, "That's why I bought it!" The guitar now resides in Rick Harte's Boston townhouse along with one of Jeff Conolly's original Vox Continental organs. 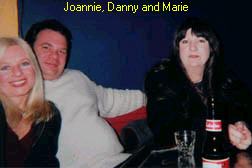 The club called The Bug Jar was on my left as I approached it on snow covered Monroe St. I banged a 'yoowee' and grabbed a space not too far behind Danny McCormack's dark Japanese sports car which was (naturally) parked right in front. "The Pats are ahead by seven." Danny said as he came out to meet me, large clouds of frozen condensation coming from his mouth. "I know, I've been listening on the radio." I said excitedly! "Vinatieri missed a forty-four yarder." Danny said as he grabbed my guitar from my front seat. I rolled my amp in as far as the bar and ordered a Budweiser from an extremely nubile young maiden that was tough to take ya eyes off of.
I stuffed the amp behind a black velvet curtain that hung neatly behind the drum kit and joined Danny at the bar. We watched the aforementioned nubile young maiden do her bartender thing for awhile and then took over a booth to wait for our set. Soon Murphy's wife, Marie, and cousin Joannie, joined us. The booth was in prime people watching position and we commented on everyone who walked in as we enjoyed a few rounds of drinks. Normally I would drive home directly after the gig, but it is a solid 8 hour drive and it is just so dangerously cold out here tonight. Right about now, I am so glad I decided to stay the night at a nearby hotel. 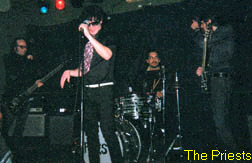 I love the people in Rochester. Tough but friendly, and they know and love Rock music. They want their bands to look like rock stars. The members the of other two bands that opened tonight, The UV Rays and The Priests, looked really great (sort of that early 80's look) dressed all in black, spiky hair and studded belts. (Chronologically, after Ziggy Stardust and before Ramones) I appreciate the effort but I feel underdressed in my old jeans and mucky black boots. It's obvious there is a real rock and roll ˜scene" going on here, much like the old Rat days in Boston. The scenesters were also dressed up. "Everyone's so young." I commented to my booth mates. (UH, HELLO RICK, maybe that's because you are in your fifties.) (Sometimes I forget.)

11:30 pm still frigid out
It's almost time to go on so I order another Black Russian and head toward the stage. The room is nicely filled. A guy approaches me with a copy of 'Lyres on Fyre' and asks me for an autograph. "I was kinda hoping to see Andy Babiuke or Greg Prevost (Chesterfield Kings) here tonight." I said as I signed the LP right above the picture of my bass amp. "Andy couldn't make it tonight." is all the guy said. The stage is just about the right size, not too big and roughly four feet high. I roll my amp into position next to Murphy's crash cymbal, tune my guitar and lean it against my amp. Jeff is setting up his borrowed Farfisa and I just want to get out of his way. "I knew I liked this place when I saw the cinder blocks." he said as he labored to put four under his amplifier. 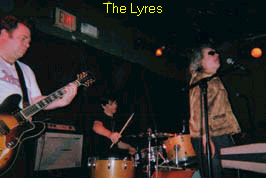 "Who has a song list?" Jeff asked. A tattered piece of yellow paper appeared from stage left. He grabbed it and placed it on the organ. He turned around and it is immediately swiped, disappearing forever into the audience. "OK, who has a song list?" he asked again. Murphy handed him a tiny, tattered, white piece of paper. "This will do." he said, and started shouting into the mic. "Ok, lets get some monitors going here. Give me all you've got. Make it squeal. C'mon gimme some more. Make it SQUEAL!" A piercing, ear splitting howl made us stage dwellers wince. "That's it, you got it!" Jeff said as he quickly swung around towards Danny and shouted "HOW DO YOU KNOW, ONE TWO THREE FOUR."

I think the set is going well. The sound is pretty good from my side of the stage, I can hear the vocals just fine and the audience is responding. The people right in front are just kinda standing there looking up, but there is a clutch of guys in the middle of the room bouncing and shaking all around, like a mini mosh pit only safer. I love how people (usually girls) just sort of "borrow" Jeff's tambourine for awhile, dancing and shaking it until he sticks his hand out. It is always returned right on cue.

It is getting near the end of our limited song list. At the very end of what is more than likely our last tune, Jeff's borrowed organ just fell right off the stage! It must have slowly crept closer to the edge until finally it just toppled over. Three guys caught it before it hit the floor and heaved it right back into position. Jeff is trying to get it going again but the 1/4 inch jack seems to be broken off with the cord still sticking out of it. It's obvious that it will not be working again tonight. We end the song and walk off the stage straight to the bar. After about five minutes I can hear Paul playing the beat to 'No Reason to Complain'. Fortunately, this song has no organ part. We all run back onstage This song always goes over well.

That's about it for me. I pushed my amp through the snow to my truck and followed Danny to the hotel. Jeez! Am I tired. I fall asleep as soon as my head hits the pillow. Echos of the amplifiers running through my head. 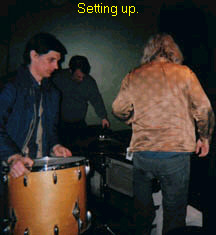 I can never sleep in the morning so I did what any self respecting morning person would do. I pull on my clothes and leave. In the lobby there is a decent 'breakfast check'. I grab toast, coffee, and a couple of hard boiled eggs for the road and push the door open to the outside world. It feels like I am in the Arctic. That first breath of sub-zero air shocks me into reality. The snow crunches beneath my boots; it is still dark and I am all alone. My Mazda pick-up fires right up but after ten minutes of running the temperature gauge still reads "cold" .
I light up an Excaliber to keep warm and point the wheels toward the exit. I know there are many miles before me but I feel really good. Anxious to be with my own thoughts and see the sights in the daylight. Chatting on the phone with my girlfriend, Mary Jo, listening to Steve Earle, Fountains of Wayne, and Pebbles Surf music, I roll past the Erie Canal and towns with foreign names like Amsterdam, Guilder Land and Castleton on Hudson.

My cell phone rings; it's Danny calling to check in. He is just waking up in Rochester and I am already at the Massachusetts border. I consult my map and decide to exit the Mass Pike and slash my way diagonally across the State on Route 146 to Route 195 South. As I cross the Bourne Bridge onto Cape Cod, there is a fishing vessel peacefully making way through the canal toward Sagamore. Its wake trailing a mile behind it in the unusually calm waters. 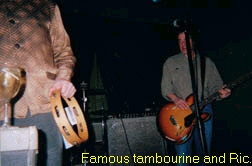 I stroke the dashboard and say aloud "Just a few more miles, Baby." Soon both man and machine are eagerly swinging into a driveway next to an ivy covered, three bedroom cape with weathered shingles. I turn off the ignition and once again stroke the dashboard. "Thanks for getting me home safe; you rest now." The trip odometer reads 919 miles. I peeled my sore ass off the seat and sprinted to the back door directly into the warm, soft embrace of my sweet Mary Jo. This wonderful woman is kissing me all over my face and fussing about. It is such a good feeling and I wouldn't trade my life for anything.
Quite a revelation, considering a little more than a year ago I was completely blind sided by certain devastating events in my life. It's all behind me now. As we hold each other tightly in our kitchen, I feel really good, like I have won The Lottery. The Lottery of Love. RC