2:30 pm Sat 5/10/03 sunny, warm, nice
I am kinda excited about going to The Abbey Lounge this afternoon, where I will attempt to last for the whole duration of the ˜White Trash Festival"(From 3:00pm to 1:00pm). Frankly, I have my doubts, given my love of BEER. I had a good lunch, did some walking, had a decent workout, all in an effort to prepare my body for the onslaught of loud music, tobacco, and ice cold long neck Miller Highlifes. 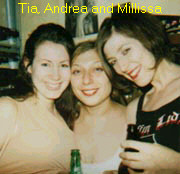 I found a parking space right in front (a good sign) and placed half a stogie in the ashtray. Smoking is still allowed in this bar, but I am reluctant to bring my cigars inside. On such a gorgeous afternoon I was surprised to encounter a packed club. I immediately ran into Real Kid John Felice, "Hey Rick, your lookin' good man" the smiling legend offered. (WOW, this could be a good day!!)"Thanks Johnny, I actually feel pretty good." I answered. "What brings you here?" he asked. "BEER." I answered, as I ordered the first of what will be many. There is nothing like a cold beer on a nice afternoon, and The Abbey has the coldest.

At the other end of the room, at a table, sat Andrea Gillis. She sees me, and motions me over to the empty seat next to her. Those wonderful blue eyes clubbed me over the head and dragged me right over. I swear I am powerless against them. (WOW, this could indeed be a good day)

She is on 'set list duty' for her band The Other Girls who will be playing at about 6:00 ish. Andrea is also running the sound system for the affair, as well as all the other stuff she does around here. It will be a busy day for her, so I am grateful to have a few minutes to talk, and of course, be next to her, because she radiates this ENERGY that I can feel right in my chest. It's incredibly attractive to me and I am starting to develop a crush on this amazing woman. (Rick, you wistful IDIOT, can't you see she's way outta your league. Snap out of it man!) 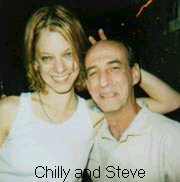 "Got your cheat notes?" I asked. "Yup, got 'em right here." She flipped through a few pages of song lyrics, neatly hand written in black sharpie. "Gotta run sweetie." She breathed, and off she went to the sound board, which I know will keep her occupied for the whole damn night.

The first band, Tunnel of Love set up on the floor, not even in front of the stage, but in the middle of the room. They didn't even use the club P.A! They sang through an old guitar amp. "It's just what they want to do." was bartender Steve's response to my bewildered look. The lead singer put on a cape, that emitted a stench that was so vile, so foul, that two people actually puked. I kid you NOT. I decided to hang in the bar area awhile with Steve and his lovely wife and therefore avoid the 'pandemonium of puke' going on in the next room.

All the doors were wide open, it was a warm sunny day, and the Millers were going down a little too nicely. (Note to myself; Yo Rick, dude, you'll be lucky if you make it to 5:00)


Satans Teardrops took control of the stage, and the user friendly punkarockabilly rhythm signified to all, that it was indeed safe to enter the performance room. The response was immediate and unanimous. Everyone was having FUN moving to the Eddy Cocheranesque sounds. There is nothing quite like the constant motion of an upright bass player.

5:30 ish
"Ten dollar cover tonight, still plenty of food left." explained doorman, and Coffin Lids' guitarist, 'Skinny Mike' Fuedale, to about 8 people who just walked in, attracted by the Southern flavored, cowboy rockers from Pittsburg, known as The Midnight Ploughboys featuring, on guitar, Mike's older brother, Jim Fuedale, who played a brand new Guild six string that looked so cool, I thought it was an antique. (As we all know, one does not go shopping for a brand new Guild, with less than four grand in your wallet, quite an expense for a school teacher.) These guys caused a riot after each and every song. Excellent!

6:00ish Miller time
"Mom, this is my friend Rick." Andrea said with an accompanying hand gesture. "Pleased to meet you." I said, and guessing a hand shake would be appropriate, we shook hands. Looking at this handsome blonde woman, I suddenly realized how young Andrea must be.( Rick, you DOG, do NOT say you have a crush on her mother!!!)
It is very comfortable hanging out at the Abbey. Unlike The Kirkland, there are plenty of corners for a shy guy like myself to meld into, like a voyeuristic shadow, catching little snippets of other peoples lives and relationships. I DO love people watching. A few of the nice people in attendance today, rock historian/author Brett Milano munching on the free food. Wicked cute Jen, beautiful and self-effacing film director Cheryl Eagan-Donovan posing with the lovely and talented bassist and Director of Operations for the 'Wednesday Night Club' Miss Michele Paulhus (looking way cuter than should be legally allowed), the mischievous and mysterious blonde beauty from the band Caged Heat, known as 'Chilly', posing with everybody's friend, and Abbey lounge bartender Steve, Tia and Mellissa, flanking Andrea Gillis, (and looking way too pretty for there own good!) and lastly, looking dangerously adorable, my old friend, Miss Julie Ray, who had her hands full, fending off all the guys hitting on her. (gotta love the red plaid mini skirt). She's so cute I feel like hitting on her myself, I'm sure she would crack up at the very thought!! 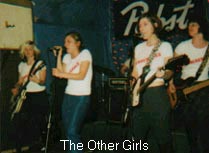 The Other Girls are getting themselves ready to play, I hear more than a few complaints from the girls about the white schnockered tee shirts that Andrea has just unexpectedly handed them. Personally, I would have rather seen them in their more revealing and colorful tops, that they originally had on, and I'm sure every guy in the room would agree, but this band was way more than just five babes on stage, they played a 'pissa', tight set of rock covers. Andrea's ballsy, bluesy vocals, and sexy, between song banter, had ME going, big time. Just the way she scanned the crowd and slowly said, "So many cute boys." just turned me into Jello. Mold me Andrea!!. Jen Rassler, free from the burden of singing, totally rocked out on guitar, not unlike J.J. Rassler. I really love a good back up vocalist, and Mellissa was certainly all that and more. Michele Paulhus is fast becoming one of my favorite bass players, right up there with Cheryl Crane and B-Face. She has that 'bounce' and she's not worried about breaking a fingernail. I mean, she looks so feminine that her attack kinda surprises me, she is definitely RIGHT THERE. Linda Khory on drums is always a good thing, yes, one of my personal faves, lump her right in there with Murphy and Ferguson. I want to see these guys again.

7:00pm
I seem to have a good buzz going, just the thing for the next band Lenny and the Piss Poor Boys. A real drinking band with a nice Hank Williams feel. The crowd responded favorably.

8:00pm or so
Ya gotta love The Konks. It was my first Konks experience, and I am definitely now a fan. I met the lead guitarist, BOB, in L.A. this past February at our, still uncompensated, Lyres gig at the L.A. Shakedown

9:00pm
The Marvels are electric and cool. The big dude with the spiky black hair, (who sings lead) does a great job of whipping the crowd (and himself) into a maniacal frenzy. Where did these young guys come from? So much energy. Check them out. 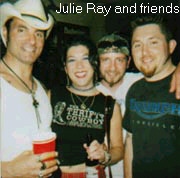 Well kids,that is just about IT for me. I forgot to bring my designated driver, and the thought of making a fool of myself in front of all these wonderful people, has me hopping out the door and heading for the S&S Deli for a couple of cappuccinos before heading home. In closing, I must say that I had a great time at The Abbey. There is not another club in town that I would feel comfortable spending seven hours in, but don't take MY word for it. Come on in and check it out for yourself. THE ABBEY LOUNGE IS THE NEW CANTONES. RC