A Night Of Boston Punk Rock

By Miss Lyn and Blowfish.

The Boston Rock'n'Roll Museum's "Live at The Rat" Night took place on Saturday, July 19th at The Regent Theater in Arlington, MA. We all knew it would be worth itģ..so those of us who love the rock/punk scene of the late 70's Boston trekked on down, one way or another. Except for Jimmy Harold. If he went on stage even for one minute it would have brought the house down. It would have been our way of thanking him for all those Rat years.
One of the reasons this show was held out in the middle of nowhere is that the office for the Boston Rock'n'Roll Museum is upstairs at The Regent Theater. We were shown some highlights of the collection while there and all I gotta say is it's pretty damned amazingģand HUGE!! The collection covers many, many years and genres of musicģnot just Rock'n'Roll, but Chuck White Photo Here says of items such as a photo of Dvorak conducting the BSO; "guys like him and Mozart were the original rock'n'rollers.", or of their extensive Ames Brothers collection; "They were the original New Kids on the Block!" .

Chuck was very happy with the event and told us his highlights of the evening were "Hanging out with Springa Photo Hereģ.that's always hilarious." And "Seeing Ray Boy Fernandes (of The Atlantics). He had us in tears, laughing so hard with stories about the Atlantics." Jonathan Robinson, the museum's curator was there, he told us about how they have 4 football fields worth of Aerosmith stuff and that's just the beginning. While there we saw early BGNs, a letter to Sleep Chamber from GG Allin while in jail, copies of every Avatar and The Broadside ever published (old hippie leftist newspapers for you yunguns!), gig flyers, set lists, stuff from people I didn't even know where from Boston! These guys must are total collector fanatics coz they have everything!!

The theater was packed, not sold out but close! There were about 400 people for the 475 capacity theater. Turns out only five rows of seats had sold until the day of the show!! That made some people pretty nervous right up 'til the time of the show! But show they didģ.There were so many people there from years and years ago it was really hard to recognize some and others looked pretty much the same as they did back then!! I was in the backstage area with Ray Boy Fernandes (now a Hip Hop record producer!) for about Į an hour 'til Kenne Highland told me who it was!! But Marilyn Felice Photo Here was there and despite her battle with lung cancer right now she looks really incredible!! (GOOD LUCK MARILYN, keep up the fight girl, you will win!!) Also in the crowd was Laurel Katz (former Emerson DJ) who came up from Pennsylvania for the show! 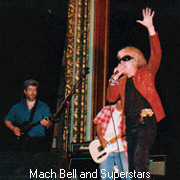 So to the musicģ.first band up was The Rat All Stars Photo Here.ģthis was truly a band of all stars coz they all have an incredible history to go along with their names: Mach Bell (vocals) of Thundertrain and Bleu's Chorus, Asa Brebner(guitar) of ģeverything....Mickey Clean and The Mezz, Robin Lane and the Chartbusters and just plain Asa Brebner fame, Billy Loosigian(guitar) of The Boom Boom Band and The Darlings, Joe Marino (drums) the original Reddy Teddy drummer before Bugwit..now that's early!! Jeff Lock (guitar) from the Atlantics and Carl Biancucci (bass) of everything also, like Pussy Crush, The Vatican Sex Kittens, The Classic Ruins, Rick Blaze Band and various studio sessions around the world!. The Rat All Stars did a set of inspired blues songs and a couple Boston classics like JoJo Richman's Road Runner and Mickey Clean's Who Do You Voodoo.

Next up were Unnatural Axe. They did an awesome set. Covering all their classics like "The Man I Don't Want To Be" , "Hitler's Brain", and the "The Creeper" . The Axe are as close to a sure thing as you can get.
They have played reunions with regularity so they have it down. They haven't slowed their tempos or lowered their sound level at all. Actually this could be said of all the groups tonight. These Boston punks do not want to fade away gracefully. Nope, they'll make a big racket right to the grave.
The Axe's set also illustrated the difference of theatre vs. club. At the Rat we would have crowded the front and moved a bit. It felt strange to sit and listen.

Seeing Jeff playing organ for so many years makes you forget what he looks like from the waist down. Lately he has performed with DMZ without his keyboard and it seems like he's unleashed. Tonight lots of jumping punctuates his throaty yells. I mean he really YELLS which brings the angry punk spirit back into the songs. The group is right on his heels. Rassler continues to astound. Paul Murphy is one of the scene's great drummers. Coraccio is unflagging.
DMZ's performance along with Unnatural Axe is a good reasurrance to us that we weren't deluded back in the day. These groups were worth getting excited about. The music they play is what we needed then and now.

Talking about then, they screened a short video called "I Met Her At The Rat". It was produced and edited by Tom White with footage supplied by Dr. Krull and Artie Freedman. It showed one night at the Rat What a hoot. Many of the people in the clip were at the theater 25 years older. Whoops went up for the recognizable faces like Richie Parsons, Joanne Greene and Linda Leather. The biggest reaction was for the notorious Bill Tupper. It was great to see him and not to have him able talk your ear off. (By the way he was last seen in NYC in a SUIT !)
They also screened another film by Tom White which has already won an award. It was framed by the song "Man I don't Wanna Be". Live footage, home movies and other images were brought together to give a (dare I say it ?) poignant look at what your life can turn out to be. It really had an emotional punch. It looks like Tommy's turning out to be a filmmaker/guitarist. 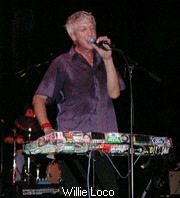 For so long Willie Loco has been the alpha-omega of the scene. Those Boom Boom gigs in the seventies were where we first saw each other. It was when we first realized we were a 'group'. It was where we realized there was a "scene'.
So ya, we get that warm all over feeling when we see him. The Boom Boom's start with Hair. Singing, "Do the baldy, do the bald."...hey is that a slam? The group has done a few reunion gigs so they are rehearsed and sound solid.. Half of the kick is hearing the great songs the other half is seeing Willie being Willie. The band sounds good but Billy Loosigian is playing all is Les Paul licks on a thinner sounding SG guitar and there is a difference. Billy, I know it's harder on the shoulder but next time use the Les Paul.

Real Kids were up last, they arrived from something like a week long tour and had JUST gotten off the plane and came right to The Regent for their set. SO I guess you could say they were a little worse for wear, that must've been it. The set was weary, John and Billy seemed weary and John seemed a little...sad judging by his on stage monologues, of which there were quite a fewģand long.

One of the highlights of the set was when DMZ's Paul Murphy. First, he kept trying to get B-Face to sing harmonies and was successful only at making him smile and laugh a lot. I have to say that B-Face is one of the CUTEST guys in Boston music for sure and when he smiles his face just totally lights up and he's even sweeter looking! Murphy then decided to dance up front Photo ģin his ownģthen with Frank Rowe Photo ...original styleģ.and kept motioning to the rest of the audience to get up and dance. He then disappeared only to show up a couple minutes later coming out on to the stage to play "cowbell" with a couple empty bottles Photo One ...Photo Two which he banged on 'til they shattered. A few minutes later he actually came out with a broom and worked on sweeping up the glass shards Photo One ...Photo Two , all the while the Real Kids just kept playing! It was pretty entertaining to say the least!!

Throughout the evening, the inimitable Kenne Highland did a fantastic job as the MC. Introducing each band...giving out info on what each band was doing twenty years ago on this or that date, making the usual Highland in-jokes and entertaining the crowd in general. It was a fun night of celebrating our awesome scene here in Boston.