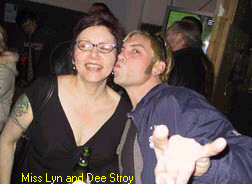 Well folks, I'll be honest with you, a milestone bday was approaching...the big Five-Oh!!
Wow, where did all the time go??? Can I really be this OLD??

I pondered the options for this benchmark date; should I let it slide by and not let anyone know? Should I let the world in on to the fact that I'm 50 and still going strong??? Hey, you know 50's the new 30! So I chose the latter.

Well, first and foremost it HAD to be at The Abbey, Andrea Gillis gave me a Friday night, November 12th, no backing out now!! So I sat back and thought about what bands should play a night such as this…so many bands, so many years…old or new?? Of course there had to be both old AND new! 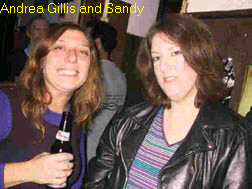 The Marvels were first on the list, since they are my fave Boston band and have been for a while now…and I love Sugabomb and knew I wanted them as well.

But then I thought back to what first brought me to Boston…Reddy Teddy actually, at that New York Dolls gig out in Ashland when I still lived with my parents in 1974. Well they definitely had to be on the bill too!!

And then I thought about friends….people I love and respect and appreciate in the music scene… of course that meant powerhouse Mach Bell… we've been through so much over the many years I've known him since growing up in the same town, me as a Thundertrain groupie etc….and Carl Biancucci who is such an awesome person and an incredible bass player, and of course Jimmy Birmingham; hottie, sweetie and an blow-me-away drummer. So I sent out an email to all three and suggested they get together for a special night of music on my behalf!! Ha ha, they loved the idea….and Mach V was born. 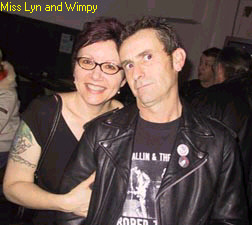 I had also asked Unnatural Axe but bass player, Frank had prior commitments so Ritchie Parsons asked about doing a couple songs with someone and Tommy White asked about showing his videos, both really excellent ideas and I jumped at the chance to have them both involved.

As the date crept closer…. I thought about how to present this evening… much of my 50 years were me, here in Boston and ever since I've been in Boston I've been involved in the music scene….I thought about all the people I've met, known, loved, partied with and thought they should be part of the evening too!! I decided they would all be there too, in photos on the walls, so out came the photo album, thick with memories.: Johnny Angel, Rita Ratt and Merle Allin, Merle now, Paul and Mickey Zone of the Fast, 999, Helanie Saad, T. Max, Denise Donahue, Kenne Highland, Larry Lifeless, Blowfish, Ritchie Parsons and Jimmy Dufour, Oedipus, Third Rail's Richard Nolan, Wimpy & Chris from The Jabbers, Steve Cataldo, Jon Macey, Kenny Kaiser, RayBoy Fernandes, New Year's Eve 1980 and of course Cantone's!! 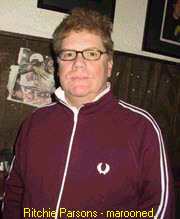 So the night began with Tommy White Trash's "Bride of Frank" and "You'll Pay For This!" two great short films! Bride of Frank was the story of Frank and wedded bliss???? And You'll Pay For This! is an awesome walk down Boston and Unnatural Axe's memory lane. Starting with Tommy and Ritchie, as just about babies, playing in Ritchie's parents' cellar, it moves on to cover gigs at The Rat, a clip of a Rita Ratt video interview with Ritchie and singing on They Saved Hitlers Brain, clips from The Creeper movie with a all star Boston cast showing up through out, and lots of cool Axe music.

Then the music started with Sugabomb who were gracious enough to go on first…I love watching DeeStroy and Vikki Sixx on stage ( CLick Here For Picture) and oh, how I can relate to their song Titties!! They had their new bass player on board and Larry Litogot (I LUV his killer blue eyes) of Penis Flytrap standing in as drummer for the night. As an added treat, original bass player, Sandy and disabled drummer Dave were there as well, just off to the side of the stage. 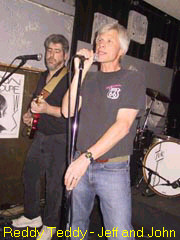 Reddy Teddy took the stage next…what can I say about them?? They are great!! They are all fantastic and seasoned musicians! They are performing songs written by rock'n'roll genius Matthew MacKenzie. This is a combo that can't be beat. It was a truly enjoyable set.

But then came Mach V. WOW!!!! The band of "Miss Lyn (Boy Toys", as Mach put it!! Mach Bell is unmatchable as a stage presence anyway but this night he was more powerful than ever!!! He stormed the stage, voice exceptionally strong, energy level surpassing anything I've seen lately…anywhere! He reminisced about the old 1964 red VW bug we used to drive around in…oh yeah, I remember those old days of me following Thundertrain around, us going to parties and I'd end up so drunk Mach would have to drive the car for me!! Here's a good one; Mach's driving, Steven Silva and I are in the back seat and he refers to a woman using a particularly bad word. I scream at him "Don't you talk like that in front of me!! I'm a fucking lady!!" phhht…ah, the pleasurable effects of alcohol!! I remember it well. 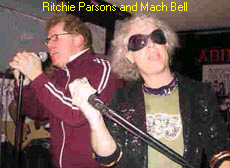 My personal highlight of the night though, was when Ritchie Parsons got up with Mach V to do a couple tunes. He did an Axe tune, Can't Wait for Summertime and as a total surprise did a Tuff Darts song; All For The Love of Rock'n'Roll!! But Ritchie told the story…one I had never heard about how he used to see me at the Orange Line Downtown Crossing Subway concession stand on his way to his job at Filene's Basement. He had a wicked crush on me and noted my Tuff Darts pin. Figuring he had to learn about Tuff Dartsso he could finally approach me and talk to me he found out about the whole world of music happening at that time and ended up forming a band himself…and that band was Unnatural Axe. He never did speak to me until two years after that, at The Rat, he said, and I was Miss Lyn and he was the lead singer of Unnatural Axe. I figured I heard him wrong!! It was such a beautiful compliment and such a great story. I was standing there with my mouth hanging open!! It even gave me chills!! People, I have to tell you, this made my night...this made it all worthwhile. And Ritchie, thanks So much!!! 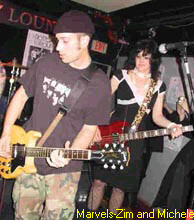 But the evening wasn't done yet…The Marvels were up next. Yup, they still are my fave Boston band and I think I could watch Staffy for hours on end, and now, with Jesse Von Kenmore (drums) and Michele Paulhaus (on bass) making up a super powerful rhythm section the band is better than evah!!! They are true to the Punk I knew "back when" and hearing them brings me back to the old days because they are true to the sound. They were a great way to end a great night and Michelle says when she turns 35 she hopes she looks a good as me!!! (Thanks Michelle, but I don't think you have to worry too much about that!)

We ended the evening exchanging beauty secrets. It was quite a memorable evening and I am so glad I decided to throw myself a party!
A huge thanks to all the bands and all the people that came to the show to help me celebrate!!!

Note: you can also read a review of the night by BMO on Now Wave Magazine's site.