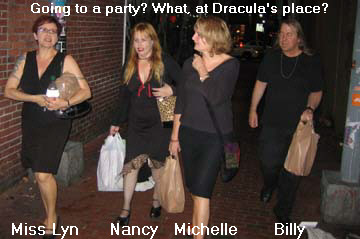 There's nothing I hate more than a good party. There's always a lot of laughing and drinking and I'm a stick in the mud. So, I've said it, it's no secret, I'm a big drag at a party. TMAX however did send me an invitation to his exclusive Noise 25th Anniversary party and I want to be in that exclusive group so I gotta go.
This is a TMAX party so we all know what that means…dress up time. I always think of Halloween as October 31st; TMAX thinks of Halloween as a lifestyle choice. He dictates you come as an eighties' celebrity. I'm going in black like always, that's why I'm a lousy party goer: Reason #89.

I park in Central Square. I look around Mass Ave for which way to go and out of an alley come Miss Lyn and Michelle on a booze run. We turn and see Billy Borgioli and Nancy Neon walking toward us with bags of booze and presents. PRESENTS! Sucky party guest reason #15: I didn't ever think of bringing a present.
Walking along I look back at the group and realize we're all in black (no costumes). If someone saw us they wouldn't ask, "What party are you going too?" they would ask, "WHO DIED?" 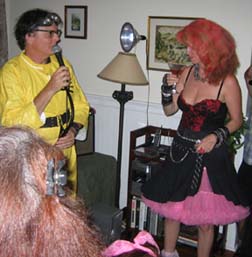 At the house we meet two people coming out - dressed as Walter Mondale and Geraldine Ferarro. They ask for our vote. That's pretty funny. Score one for the dress up crowd.
At the door to the apartment you can hear the din of voices seeping through the door. The door opens to a hallway that leads to one half crowded room and one very crowded room. Once in I see Mach Bell sitting in a side room that looks deserted. That's the way I go of course. Mach and his wife Julia have found a nice quiet haven.
I decide to check out the crowded rooms for people I know. I get through one room but the second room is jammed. Jammed like a Japanese subway car. I see TMAX in a yellow jump suit a la Devo. Liz is in an elaborate recreation of Cindy Lauper: a Cindy Lauper with enormous Laupers. I can't do it. I'm back in the room with Mach Bell. Sucky party guest reason #63: can't mingle well.

We get visitors. Rudd-man, John Powhida comes in for a rest. He's got lots of news. Interesting gigs and new albums on the way flow through his conversation. He's living the rock and roll life. He doesn't know who I am though, even after I tell him. Sucky party guest reason #26: I'm a big nobody,
Jimmy Birmingham and Kim are welcomed in. He's another guy primed with Boston rock stories. He says there's possible Real Kids gigs in Spain amongst other inside stories.
Vikki Sixx sashays in along with Linda from Muck and the Mires. Hey, things aren't so bad in the side room.
Rayboy enters, sees me and says. "Don't talk to me." "But Ray…," I say. "No, I'm not talking to you." He's making me pay for the comments I made in The Alpo Tribute story. He finally admits he's kidding and I'm knee deep in Atlantics' stories before you know it. 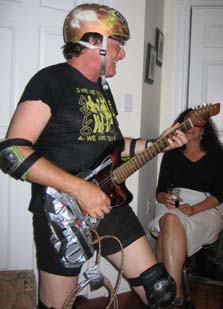 This couldn't last of course. All of sudden TMAX bursts in with a guitar and assails us with Devo's Mongoloid. Well, this was unpleasant. TMAX has shed his yellow jump suit but has a Devo shirt underneath. This guy layers his costumes. Then he says the dreaded words, "Sing along." "D-E-V-O" we bellow, "D-E-V-O". Now I'm sweating pretty good and with a door no more than 10 feet to the left, you know what I'm thinking. Sucky party guest reason #43: Constant thoughts of escape.
Then he's off to ply his guerilla Devo tactics on other party people. Poor sods.
TMax also had the stylings of Mondo Bondo (or something) to grace the party. This guy was dressed up as something I can't peg and dear reader, I didn't stay in the room to hear the act. I failed you here but I'm weak and lack both fortitude and a sense of duty. You wouldn't want to be in a foxhole with me.

One more try to get into the real party room. People are singing Happy Birthday and there must be a cake I can't see. As I approach the event horizon of the crowded room, Pat McGrath tells me to forget it, don't try to go in. Do I need more than that? No, Pat is a wise sage and I'm back in the side room.
Meanwhile, Miss Lyn did get in the crowded room and says that the TMAXer conducted the rendition of Happy Birthday insisting it must be harmonized before the hungry would eat. The cutting of the cut was synchronized with the sound effects from the shower scene in Psycho. Being a sugar junkie Miss Lyn tried the cake, chocolate with chocolate frosting. The report: absolutely delicious.

I'm not the right person to bring you this story but who else will? Is the Globe writing this up? The Herald? The Dig? The Noise, even? No, I think this is it right here or nowhere. Let me say that there were some nice looking people of both sexes at the party. That makes a great party right there. There was lots of booze and that chocolate on chocolate cake. People were having a GREAT time socializing in that crowded room.

None of this means anything to the Party Pooper who embraced the front door knob like a long lost lover…and then…out.
Oh, by the way HAPPY 25th Anniversary to the NOISE.