Lyres, Muck and the Mires, Woggles 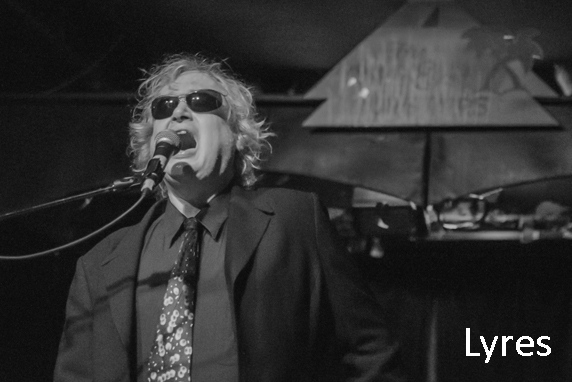 Up into the Stratosphere.
Seems like some rock 'n roll ruling body somewhere declared May to be garage month in Boston. The Standells opened the double door for the month a crack early on and Lyres, Muck and the Mires and Woggles blew it wide open at month's end.
Lyres are on a performance roll, tonight they are loose and boisterous. A couple of the slower - by Lyres standards - tunes got the crowd's attention and response and the band digs deeper into them to everyone's pleasure. Connolly frequently mimed the basic elements of a given tune to the band, then 1 2 3 4 go. Some tunes seemed ready to careen off the rails on the sharp turns only to snap back onto the track with the verse or chorus. Late in the set, one slow build tune locked the audience to the band. It built up pressure each time around and ended with Connolly shredding his voice into the lyrics - no release. It was pissa. 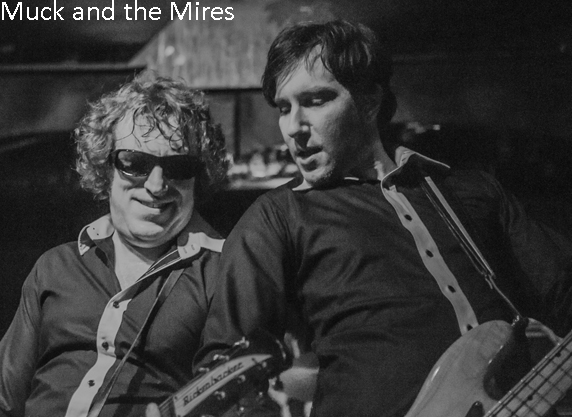 Up, up into the Thermosphere.
Muck and the Mires are as tight and crisp as Lyres are loose and reckless. They also have a big ol' bag of pop tricks that Felix the Cat would envy. Muck reaches into the bag once and out falls a glittering hook. They open it again and three part harmonies fill the air. When they're in a fix they reach into that bag of tricks and Jesse Best comes out whacking a machine gun snare drum fill. Watch them pull a lost rabbit out of their hat and the rabbit takes a two beat stutter step break that sends the tune into overdrive. What do we have here, a taut lead guitar solo with a coursing electric tone, a snarling lead vocal turn and a number of the ladies comment that they love a blond man in black and white uniform. A final reach into the bag of tricks and out hops a bass player who syncs up a riff and pounds it into our collective feet. 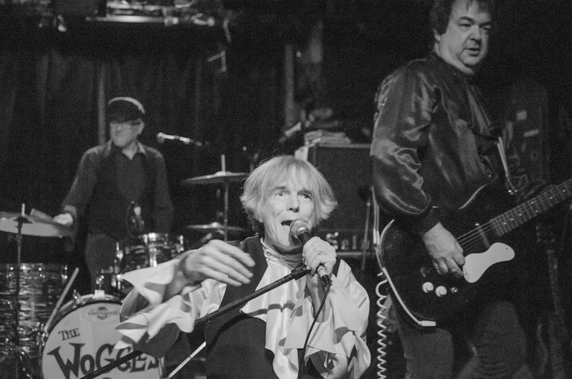 Up, up and away into the Ionosphere.
Woggles lead singer, The Professor, rides in on a manic wave created by Lyres and the Muck crew. He bounces on the crest for a moment, flies down the face and keeps his position at the maw of that perfect wave's barrel. No surfer duds though. The Professor looks like a squire for the Upper Crust in his black vest and flouncy Lord Fauntleroy shirt. The guitarist goes with a restrained biker black jabot. The rhythm section doesn't get the memo.
The swayers rock, the rockers twitch. The twitchers shuffle their feet and the dancers dance faster and harder (and wider and higher - what's that from?). The membrane of the stage lip became permeable. The band cross over it and onto the sweaty bodies on the floor. At one point, everyone but the drummer is jamming with the crowd. Those collected ride the wave. The joint is jumpin, the pace never flags, there are no breaks and there are no ballads. Song titles are a bit of a blur. They do Take It to the People and choose by means of Eeny Meeny, give us all Something to Believe, incite the floor to do the Boogaloo and note that they will Trust You When You You're Dead.

You have to love it when you hit on a triple bill that is a perfect confluence of venue, bands, crowd and collective experience. How often can you say "it just keeps getting better and louder and wilder"? These are top ten nights. They are the reason we go to shows. The mad swirl of nights like this bind us together, to the bands we hear, to the patrons we bash and lean on while dancing, and to the people who scream out their musical ecstasy or simply stand and let the sound pulse into them. Such a rare confluence pushes your senses to suck up every drop of time, place, and people. But especially, to savor the sounds - it a one night special, limited supply, right here, right now.
Satellites ping off the Ionosphere and the stars in the garage go pop, pop, pop.