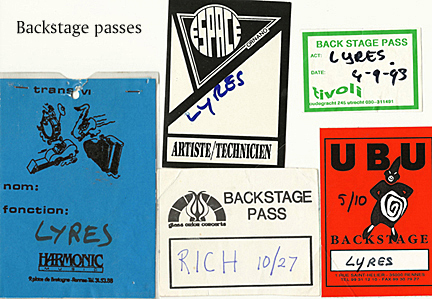 The Scandinavians are funny about liquor. As I learned one Friday afternoon in Stockholm. I figured I'd bounce out to the packie before our show and grab some beers to take back to my hotel room. WRONG! The only liquor store was like a bank with bottles on display inside locked cases. The choices were limited and the cost was astronomical. You had to take a number and wait in a long line for a "teller" to serve you. "I just want a rack of Heineken," I pleaded but to no avail. "No beer, but you can buy this nice bottle of vodka for a zillion Kronas. Think quick. We're closing in five minutes...for the weekend!" Jeez! It was still daylight! What kind of sadistic temperance movement would put all the liquor sales in the hands of the government and close them so early. 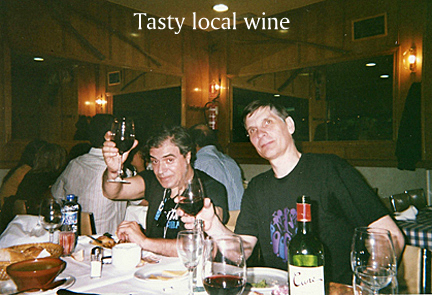 It's no wonder moonshine is popular throughout Scandinavia! I had my first taste in Trondheim, Norway. Between sound check and the show, a young man proudly served up his home brew, divulging its secret ingredient--reindeer antler. Norwegian moonshine is often mixed with coffee, like homemade Four Loco. It makes you drunk and wired. Pretty scary stuff.

Another way to get around the strict liquor laws is taking a trip on the massive Stena Line ferry between Germany and the Scandinavian Peninsula. The Lyres did this a few times. One memorable overnight trip, the boat overflowed with thrifty thirsty Scandinavians, the trunks of their Volvos stuffed with cut rate booze from the duty free shop. Soon after we left the dock, the party started, the bar was packed and the dance floor was hoppin'. I knew it was futile trying to keep up with a whole race of tall, fit, handsome, blond, hard drinking Vikings, but I gave it my best shot. I eventually gave up and crawled back to my cabin, ABBA ringing in my ears. I slept like the dead as the ship plowed on through the North Sea. 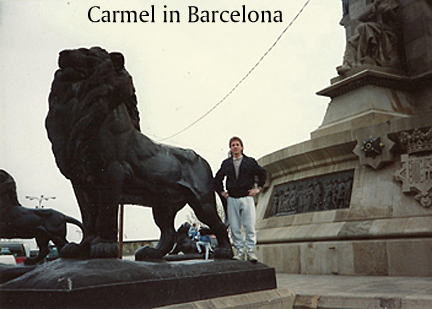 In the morning, we piled into the van and followed the other cars and trucks off the ferry. Along the docks we drove, snaking slowly down the access road. Uniformed officials waved traffic through until suddenly we were singled out! Two officers raised their arms as we approached. Off to the right, a chain link gate topped with razor wire swung open and we were directed through. It closed ominously behind us with a dull clank. A large building loomed, its massive door opening slowly. Grim looking uniformed men with guns ushered us in. They didn't speak English but our Dutch driver seemed to have a handle on whatever language they were speaking. 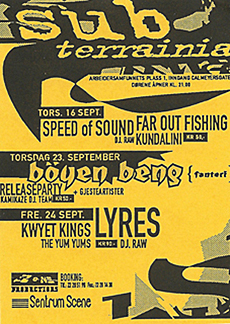 "They want our passports and they want everything out of the truck," the Dutch driver said. "Is there a problem?" I asked, screaming to myself "Well DUH Rick! Friggin' A! We've got a huge friggin' problem!" I knew we didn't have any contraband (not even liquor; too bad, I could've used a slug right then) but there's always a chance that someone could have been careless. A couple of seeds between the seat cushions might have landed our sorry asses in jail.

More conversation in the unknown language. "They're looking for drugs," our driver confirmed. "What!" "Why?" The question hung there for a beat. "Dutch driver. American rock band. There MUST be drugs," he translated. It made good sense.

In Holland, pot is legal and sold openly in coffee shops. Throughout Europe, Americans bands are considered to be gun totin', drug using cowboys. We unloaded the contents of the van onto the floor and stepped back to watch the cops open everything, cases, luggage, boxes, toothpaste tubes, shampoo bottles, and absolutely everything we had. We were ransacked and it was a mess!

Finally they cops spoke to our driver who gave us the bad news. "They want to search everybody personally."

After a moment of stunned silence somebody asked, "Can they do that?" "They have the guns and the badges. They can do whatever they want."

We all fell silent at the implications. "Wanna call a lawyer?" It was a joke, but nobody laughed.

The next thing I knew I was in a small examination room, buck naked facing a surly officer, a box of latex gloves and a tube of KY, not sure if I was shivering because I was cold or scared or both. He went through my clothing inch by inch, paying special attention to my sneakers. "What can you hide in a pair of high top All Stars?" I thought. Finally he gestured for me to dress and it was over. It was humiliating, but I suppose that's the point. A power play of sorts. They saw a Dutch driver and a American rock band and profiled us. Sometimes it works but not this time. They didn't find a damn thing. As we repacked the van, one of the officers told us they had done the same thing to the Rolling Stones, and also came up empty. 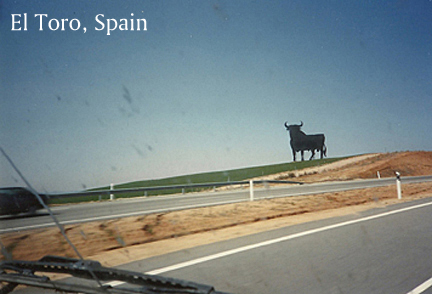 After that experience, travelling through Europe was a bit more unnerving. Before open borders in the mid 1990's, every crossing held an officer in a booth and another potential stripsearch. We were always careful and polite; a little respect goes a long way. 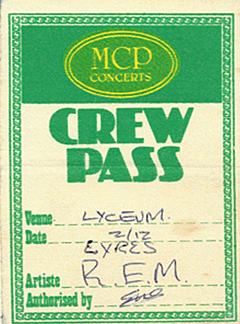 We were cruising down some highway--maybe Belgium or France or Luxembourg; I didn't know and I didn't particularly care, after a while they all kinda blended in together. Suddenly, flashing lights blazed behind us and a two tone siren blared. We pulled over. Two cops appeared at our window. One of them kept saying some word over and over again. They didn't speak a word of English and none of us spoke what ever language they did. We were baffled, but the cop was getting more and more agitated, repeating the word louder and louder. Finally, the second cop slowly and tentatively reached into the van and pushed the little hazard flasher button. Whew! He just wanted our flashers on while we were pulled over on the busy highway! The tension drained out of the van.
Okay, now what? "I think he wants your papers," I said to Murph who was driving. Paul handed over his passport. The cop looked at it, shook his head, and gave it back. Paul handed over his drivers license. "Ma-sa-tu-tets! Ma-sa-tu-tets!" one of the cops chanted, and excitedly showed it to his partner.They really got a kick out of that license! Like it was from Pluto! After the excitement died down the cop shook his head, frowned, handed it back, and gestured for something else. Murph gave him a credit card; rejected with another frown. Finally, he handed over the only thing left in his wallet, his Stop and Shop card and that did it! Everything was hunky-dory! The cops were smiling and nodding and friendly as all hell. They folded themselves back into their tiny little cop car and zoomed off. We never knew why they pulled us over or why the Stop and Shop card set us free.

Even in silly situations there was always a sense of uncertainty that could lead to real problems. We didn't know all the rules, and being American didn't allow special privileges. Keep your mouth shut, be respectful, be aware of your surroundings, and know where your passport is. I was always very careful about that last rule. That is, except for one time...

In the quaint little town of Chambery, France, a young married couple put us up for the night in their small house. They threw a dinner party for a few close friends, all Lyres fans. The wine flowed freely. The French formula of two bottles per person guaranteed a successful bash. After the guests straggled out, I relaxed, then soon realized with a shock that my dungaree jacket was missing. Shit! 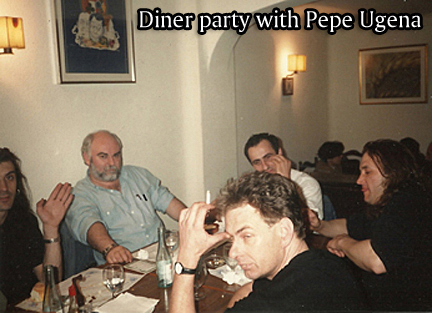 My passport's in the pocket! I looked everywhere, once I knew it wasn't anywhere in the little house. I told our host, who shook his head knowingly. Apparently one of the party guests was not only a Lyres fan, but a Rick Coraccio fan specifically. A phone call confirmed that he had taken my jacket as a souvenir. Did he know my passport was in the pocket? I'm betting he did. Jeez! Close call! Replacing your passport is a major pain in the butt. It means finding an American embassy and somehow convincing them you are who you say you are without ID's. Fortunately I was spared this ordeal because my host drove for an hour to get my jacket and passport, saving me from my fan club's enthusiasm!

Crossing borders introduced me to many different foods. I have my favorites: Spain and Holland both lean towards simple dishes that feature fresh produce. I usually found something I liked to eat in most countries except France where nothing appealed to me. Strange huh? In a country known for its cuisine. 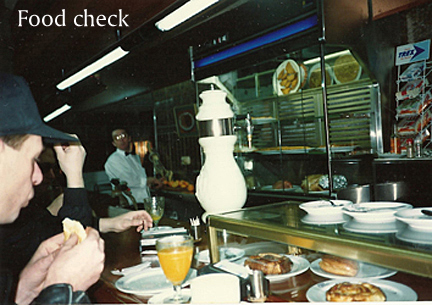 At a Paris pizza parlor, we ordered a large fromage pizza and it came with a big ol' runny raw egg on it! "No extra charge," the waiter proudly beamed. Another time I ordered a steak very well done, repeating the words "very well done" several times just to make myself absolutely clear. I was served a mass of bloody pulp and it also had a big ol' runny, raw egg on it. Disgusting! I passed it off on a local Lyres fan who obviously appreciated it more than me. I survived on baguettes and cheese, and washed it down with the amazing French wine. Every European highway rest area sold local wine. Naturally we tested them all as we journeyed on, smoking, joking, and complaining about the uncomfortable van seats made for skinny Europeans, not our ample American asses. 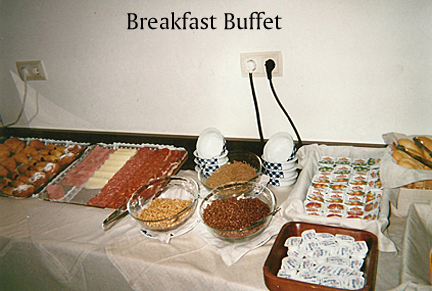 Breakfast was never a problem, every hotel had a free buffet and I always took advantage. It usually meant getting out of bed before 9:00, no problem for me, the early riser. At first, the unidentified cold cuts, stinky cheese slices, and boiled eggs turned me off. but after a while I came to like it. We always squirreled away some for later in the day, and around lunch time the pungent aroma of smelly-socks cheese and other tidbits filled the van. We were always being fed! I went through whole tours without buying food. It was a big deal to feed the Lyres! Promoters, fans, roadies, everyone tried very hard to fatten us up! And after dinner, we always found more funny cold cuts and stinky cheese in the dressing room. It seemed like a ridiculous amount of food but it did pass the time and it was a social thing to do. The food was plentiful and the intentions were good but one thing I missed on tour was a real American hamburger. European beef just tasted different, even at McDonald's. We'd joke that they used kangaroo. That's why, when the tour ended and I was back in the States, my first order of business was to get a hamburger. 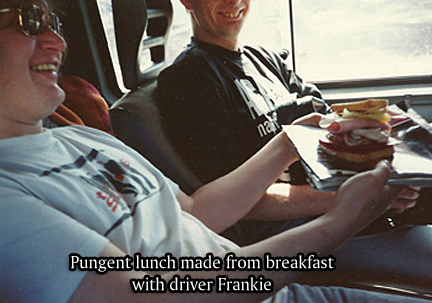 At every tour's end, I appreciated the long flight home as a quiet and reflective time, not just as a conveyance from point A to point B, but as a chance to think and remember and learn from my experiences. I've never been one to take them lightly; it all means something after all. Eight hours winging provides the proper amount of time to process everything and move from the foreign to the familiar. When the wheels finally touched down on American soil, my country of birth, it felt so good to be home.