Photos and article by Miss Lyn

Thundertrain finally stormed through Boston and its environs this August 19th through 24th and what a train ride it was!! They played Jamaica Plain's Midway Café on Friday the 22nd to a packed house (not always an easy feat at The Midway). But the throngs of rabid fans came and seemed to be quite satisfied.
The Mighty Ions started the evening with a high energy set of all their spakies/wrasllin'/party kinda songs that make them so much fun: George the Animal Steal, Ostrolopithacus and The Copralites(do you know what this one's about? Cavemen and fossilized human feces, baby!). Tommy White was hilarious, dressed like Thurston Howell the Third and talking about how all of Boston's upper crust now frequent this venue and all say "After the ballet…The Midway!!"

Classic Ruins were up next and did their classics like I'm Just a Wimp, Geraldine I Need Money…Frank Rowe has written some really great songs in his time that's for sure!! And they sound great now that they have Jeff Crane in the band, finally getting a replacement for rhythm guitar!
Meanwhile I spent a large amount of my time outside of the Midway catching up on old times with members of the Thundertrain entourage. I met up with John Reed, Bill Dill, original TT roadies. Then Bobby Edwards, original Thundertrain drummer. I was disappointed to hear he would not be playing on this tour because of a recent injury but we caught up on news and reminisced a bit. Bobby told me "Though I never got to meet them, I came to love your parents Miss Lyn, because they were always AWAY! And you threw the best parties!! I have many a fond memory of those parties on Turner Road in Holliston."

Then this guy comes up, stands in front of me and says "You used to babysit for me!! I'm Jeff Bishop!! I knew it once I heard Turner Rd!" WHOA!!…he is now acting as Thundertrain's drummer for this tour and can be seen in a local Alice Cooper tribute band as well as a Kiss tribute band. 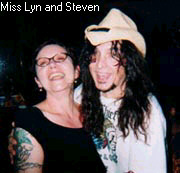 Anyway..I was just trying to find out where Steven Silva was!!!! He was sitting alone in a PT Cruiser down the street and I was too shy to go up and force myself upon him. When I finally got to see him he gave me a hug and quickly went inside the club.I thought; ' Hey, what was that about "old friend"??' Can you say disappointed???
Nonetheless I loved the Thundertrain set. Here they were after something like 23 years..together again. Mach hasn't lost any of his high energy or his sense of humor. Dressed appropriately for a 1977 kinda flashback he wore red leather pants and his bug eyed glasses he seems to be in all the time these days. Steven Silva looked SO hot in his jeans and cowboy hat outfit and long dark hair (ala Simon Ritt) Steven now also sports some cool looking tattoos too…and when he took off his jacket and had on a 'wife beater' , whew that was it for me!!!
The Midway sound system was a little screwed up but Thundertrain did an awesome job playing all the songs off their 'Teenage Suicide' album. People were having a great time! Man, it was like being back in the late 70's…in the small space of the Midway we all got swept back in time by the sheer intensity of the Thundertrain set and it was FUN!!

Saturday the 23rd Thundertrain took over TT the Bear's in Central Sq. Cambridge. In the crowd were many of the faces from the Midway the night before. Good choice to come back for more!! The band sounded really tight and awesome this night…TT's sound system is much better than The Midway's and with the larger stage they were able to do a little more jumping around and being the rock star types that they are!! Brothers Gene and Ric Provost stand one in front of the other and look (AND SOUND) great up there moving together to the beat. Wow, I forgot how great of a bass player Ric is! 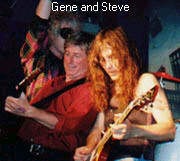 Mach , as usual, was super entertaining with his on-stage jokes and monologues…the updated 'disco sucks' rant was hilarious!!! This night he wore black patent leather pants and a plaid and rhinestone jacket he said he "ripped off Johnny Rotten". His voice was powerful and his energy level was 'through the roof" as he climbed up on Cool Gene's marshall stacks and never let up for a second. Jeff Bishop, the stand in drummer, is a true "rock and roll" ...he's got a huge drum set, must be like 50 pieces in there, but it helped to give Thundertrain and killer heavy rocking sound for their shows. This set tonight was truly awesome. The crowd was loving it and hootin' and hollerin' and holding up lighters, getting into the 'cheesiness" and showing true appreciation of the entertainment factor that is Thundertrain!!

Unnatural Axe followed Thundertrain this night. Someone forgot to tell Richie "Paaahsons" it was fancy dress night I guess. Tommy White and Frank Deihler came out in evening gowns and wigs. Tommy in teal satin creation and Frank in a raspberry satin and lace, off the shoulder number. These guys always sound great every single time they play…what else can you say about them?
Cheetah Chrome was up next. I've seen Cheetah do some really pathetic shows over the years in his more fucked up days. Most notably, a sad set at Johnny D's in Allston(for Kenne's 30th Bday) in which I think he actually forgot how to play guitar!! He is clean and sober now and it shows!! He did a long set which included Deadboys classics like Aint It Fun etc and he had Richie Parsons come up for Sonic Reducer and Won't Look Back. I asked Cheetah about Jimmy Zero and he said "He's been a recluse for the past 10 years." And about himself: he's recently married and living in Nashville…I'm so glad Cheetah is doing well…I remember him as a shy little Dead Boy , who pecked me on the cheek as a thanks for a ride to South Station and ran in to catch a train back home so many years ago with Stiv and Jimmy and Johnny.

So guys it was a rockin' Thundertrain weekend ..and it was like a breath of fresh air and fun blew into town to wake us and shake us and transport us back to the '70's for a few nights. Remarks we have heard on the chat boards and radio are mind boggling to me! HELLO!! This tour was not for Thundertrain to reform and break new ground with their sound!! There are NOT a cutting edge act. This tour was a , as in Mach's word 'cheesy' trip back in time for the fun of it!!!! I enjoyed every minute of it and I know lots of others did too!!!